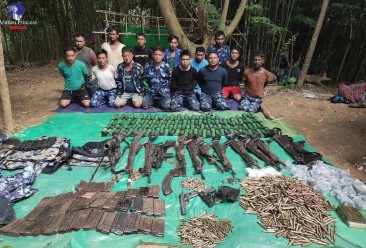 The Arakan Army (AA) says that it captured 14 junta personnel, including a police major, in northern Rakhine State’s Maungdaw Township on Monday.

“There were several casualties on the enemy’s side. Fourteen of them, including a police major, surrendered and were taken alive,” Khaing Thukha told Myanmar Now.

The exact number of BGF casualties was still not known, he said, adding that several weapons, including 27 rifles and two pistols, as well as other military equipment, were also seized.

He said the group attacked the junta-backed BGF as retaliation for the killing of six AA troops in airstrikes carried out by the regime in Karen (Kayin) State’s Mutraw (Hpapun) District earlier this month.

“The Myanmar military bombed an AA base without any valid reason at all. That’s why we attacked them back,” he said.

In a statement released shortly after the July 4 aerial bombing of the AA base in Karen National Liberation Army Brigade 5 territory, the AA vowed to avenge the deaths of its members.

A video released by the group on Monday shows a number of dead or wounded BGF troops in the back of a truck, followed by scenes of others kneeling on the ground or walking with their hands in the air as they surrender to the AA.

Khaing Thukha said the captured BGF troops, who operate under the command of Myanmar’s military, would not be mistreated.

“We will treat the prisoners of war we have captured humanely, in accordance with international law and with our own laws regarding prisoners of war,” said the AA spokesperson.

In southern Chin State’s Paletwa Township, the AA has recently been accused of unjustly detaining civilians. The group claims that the prisoners are military informants.

Khaing Thukha said that tensions continue to rise in both Rakhine and Chin states as the military steps up its activities in AA territory.

A relative of one of the women reported that they were all believed to be in good health, but added that contact with them has been extremely limited due to security measures.

“It hasn’t been easy to visit them in prison. When we go, we are subjected to thorough searches at military checkpoints. Right now, we can’t go at all,” said the family member, who did not want to be identified.

According to a statement released by the National Unity Consultative Council (NUCC)—an anti-regime coalition group—on Sunday, more than 3,400 women have been arrested by the military since it seized power in February 2021.

Regime authorities have also killed at least 300 women since the coup, the NUCC statement added.

The latest figures compiled by the Assistance Association for Political Prisoners (AAPP) show that a total of 16,432 people have been arrested for resisting the regime, of whom 12,973 were still in detention as of November 25.

Of the nearly 5,800 prisoners released by the junta on November 17 as part of an amnesty to mark Myanmar’s National Day, only 53 were political prisoners, according to the AAPP.