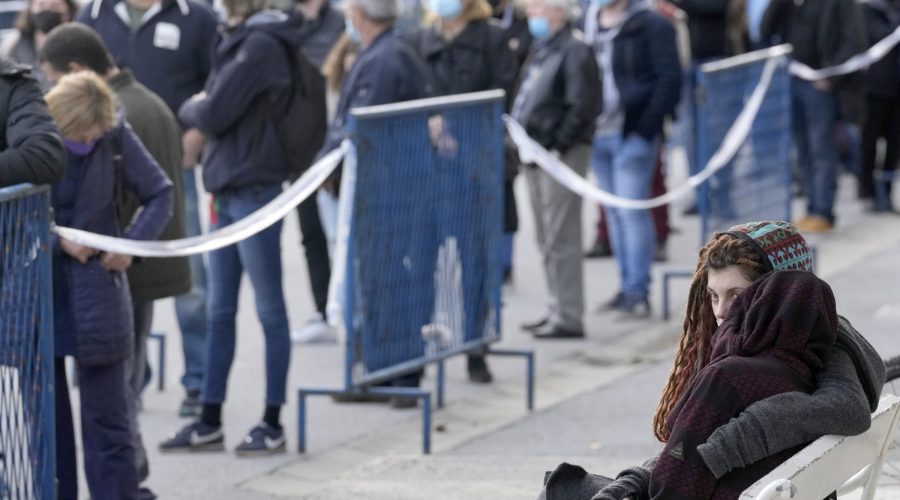 Restrictions on gatherings and travel due to COVID-19 would be lifted from December 23-26, so people could spend the holidays with loved ones, which were announced by Portugal’s prime minister in the first week of December.

The pandemic quickly grew out of control after those visits.

For the first time, the number of new daily COVID-19 cases in Portugal surpassed 10,000 on January 6. The government ordered a lockdown for at least a month in mid-January and shut down the country’s schools a week later, as alarm bells were ringing as each day brought new records of infections and deaths.

However, it was too late. According to data compiled by Johns Hopkins University, Portugal has had the highest number of cases and deaths per capita in the world for nearly a week.

There are long lines of ambulances outside of the country’s overstretched hospitals waiting for hours to transport COVID-19 patients.

To understand the danger of a fast-spreading pandemic, look no further than Portugal’s current health woes.

The pandemic’s rapid spread across Europe is being fueled by an especially contagious virus mutation first discovered in southeast England last year, according to health experts. Lockdowns and curfews will be imposed as a result of the growing threat.

The new variant, according to Roskilde University assistant professor of mathematical epidemiology Viggo Andreasen, is a game-changer.

“Things may appear good on the surface, but the (new) variant is looming,” he told journalists. “Everyone in the industry is aware of the impending arrival of a new game.”

Despite early successes in halting the spread of the virus in Denmark, the variant is threatening to spiral the pandemic out of control. Vaccination is a race against time, Prime Minister Mette Frederiksen declared earlier this month, as the strain has already spread far and wide.

Last week, the Netherlands’ National Institute for Public Health and the Environment reported an increase in cases of the variant and issued a dire warning that hospitalizations and deaths would skyrocket as a result.

Mid-December saw the Netherlands go into a five-week lockdown due to an increase in new infections, with schools and non-essential businesses closed. For this reason, on January 12, Prime Minister Mark Rutte extended the lockdown for an additional three weeks.

For the second time in a week, the Dutch government went even further and instituted a curfew of 9 pm to 4:30 am, as well as a maximum of one guest per day at home.

Several EU countries have ratcheted up their security measures in response to the discovery of a new strain of the virus. France may soon implement a third lockdown if its 12-hour daily curfew fails to slow the spread of new infections, as Belgium has until March banned all non-essential travel for residents.

Brazil and South Africa have also seen mutated strains of the virus.

Experts believe that by March, the British variant will be the primary source of infection in the United States. More than 20 states have reported it.

An upgrade for COVID-19 vaccines is being prepared to address the British and South African variants, according to Dr. Anthony Fauci, the US government’s top infectious-disease expert.

Vaccine manufacturer Moderna says it’s testing a possible booster dose against the South African variant, which Fauci called “even more ominous” than the British one.

Concerning the British strain of COVID-19, Pfizer, which makes a similar vaccine (COVID-19), says that its shot appears to be effective against the South African variant.

Restrictions on non-US citizens from the United Kingdom, 26 other European countries, Brazil, and South Africa have been reinstated as a result of these concerns.

Portugal has had to learn a lot in a short period.

Preparations for January should have been bolstered before Christmas, according to Ricardo Mexia, head of Portugal’s national association of public health doctors.

In an interview with journalists, he said, “The problem has been not only not reacting promptly but also not being proactive.” It’s time for the authorities to step up their game.

There were 16 cases of the new strain in Portugal as of January 3rd, according to a report from the Dr. Ricardo Jorge National Health Institute in Lisbon, with 10 of those cases occurring among passengers at Lisbon Airport’s international terminal. No information was given about their origins.

Three days after announcing the lockdown, Portuguese authorities rushed to tighten the restrictions even further. New cases and deaths kept piling up.

The virus monitoring agency estimated that there had been cases of the new variant in Portugal in early December and warned that the proportion of COVID-19 cases attributed to the UK strain could reach 60 percent by early February, which was just over two weeks later.

Flights to and from Britain were only halted on Saturday because of the COVID-19 surge blamed on the variant.

According to a statement from the World Health Organization’s emergency chief earlier this month, new variants of the virus are being studied and used as scapegoats.

In Geneva, Dr. Michael Ryan said, “It’s just too easy to blame the variant and say, ‘It’s the virus that did it.'” So what we didn’t do was a factor in the outcome, as well.