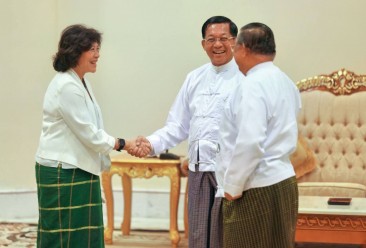 UN Special Envoy on Myanmar Noeleen Heyzer, photographed wearing a green sarong and smiling as she shook the hand of junta chief Min Aung Hlaing, has experienced a major backlash in the days that have followed their August 17 meeting.

Since her appointment to the role by UN Secretary General António Guterres in October 2021, Ms Heyzer has been attempting to sit down with Myanmar’s internationally shunned murderer-in-chief, a move she achieved on a surprise visit to Naypyitaw last week.

Myanmar is known for its “colour politics,” in which green represents the military and red is associated with the Aung San Suu Kyi-led National League for Democracy (NLD), whose elected administration was ousted in the February 2021 coup.

Was Heyzer’s own green attire selected in ignorance or was it a gesture intended to placate Min Aung Hlaing?

It can be said, after all, that there are no coincidences in politics.

A calculated colour choice does not seem to be out of the realm of possibility for Heyzer, who has in the past come under fire for comments seen as conciliatory to the junta, which has been violently crushing dissent nationwide since its attempted seizure of power last year.

While civil society and rights groups have repeatedly called on the international community to isolate and refuse to recognise the coup regime, Heyzer insisted in a January interview that the military be “included in talks to resolve Myanmar’s crisis,” describing the armed forces as being “in control” in the country.

Positions such as this, as well as any international engagement, have been used by the military council to further its claim to legitimacy.

In a press conference held just hours before their August 17 meeting, coup council spokesperson Zaw Min Tun strategically described the event as a discussion between the UN Special Envoy and “the current government of Myanmar.”

Heyzer issued a statement that day insisting that “UN engagement does not in any way confer legitimacy.”

A bitter junta responded by calling the press release “one-sided” and claiming that it had “created misunderstandings about Myanmar.” The military council released its own 28-page statement in Burmese on August 19, detailing the conversation between Min Aung Hlaing and Heyzer, which reportedly began with a claim by the coup leader that he was “taking responsibility to lead the Myanmar Government.”

Only the Special Envoy herself knows how she responded to this, but if she had announced in advance that her official visit would not be accompanied by an acknowledgement of legitimacy, the meeting arguably would not have taken place.

In any case, it was not a successful one. In his own administration’s recollection of events, Min Aung Hlaing appears to have systematically rejected all of Heyzer’s requests.

Relaying what were described as two key demands from the UN Secretary General, Heyzer called on the military to cease its airstrikes and arson attacks on civilian homes.

The junta chief claimed that the aerial attacks targeted insurgents, implying that they would continue, and he denied that his armed forces had burned villages, just as he denied that his troops had done so in the terror inflicted on Rohingya communities in northern Rakhine State in 2017.

Heyzer also raised the issue of Rohingya refugee return, while avoiding using the term “Rohingya,” according to the junta’s statement. That decision may haunt her should she choose to visit the camps in Bangladesh housing hundreds of thousands of displaced Rohingya, as she has said she plans to do.

Inquiring about detained NLD leader Aung San Suu Kyi, the Special Envoy asked that the State Counsellor be allowed to return home from a Naypyitaw detention centre, where she is facing a total of 17 years in prison—six of which were handed down just one day before Heyzer’s visit.

The coup leader stated that Suu Kyi was already being granted “special privileges,” describing her cell as a “home-like arrangement.” Meanwhile, inside sources have described it as a 13-by-14-foot building within the jail walls, exposed to the elements.

“Although we could take more serious action against her, we have been lenient on her,” Min Aung Hlaing reportedly said.

The Special Advisory Council-Myanmar (SAC-M), a team of international experts who have been calling for the international prosecution of the military chief for crimes against humanity, acknowledged in an August 19 statement that Heyzer’s meeting was a “minimum requirement of her mandate,” but that it was “clear that nothing of significance will come from it.”

“We can only imagine how awful it must have been for the UN Special Envoy to meet with murderer-in-chief Min Aung Hlaing, and the revulsion she must have felt at having to shake his blood-soaked hand,” SAC-M member Chris Sidoti is quoted as saying.

At the very time that Min Aung Hlaing was using the Special Envoy’s visit to defend both his claim to power and his military’s continued campaign of terror, locals in Sagaing Region’s Yin Paung Taing village were uncovering the bodies of civilians killed in a three-day junta siege on the community that left some 18 people dead.

There are no coincidences in politics.

With no gains to speak of, perhaps the most notable lesson from Special Envoy Heyzer’s visit to Naypyitaw is that in extending a hand to the junta, one’s own risks becoming stained with blood.

(This commentary was translated from Burmese and edited for clarity and brevity.)