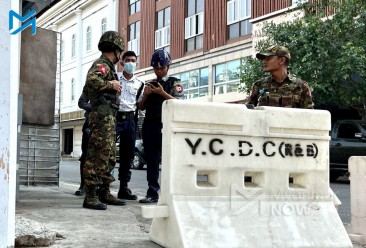 A ward administrator in Yangon’s Insein Township was shot and killed on Thursday by a group of four assailants.

Myo Nyunt Aung, 51, was shot in front of his father-in-law’s house in Pane Nelkone Ward, according to a police source and residents.

He sustained four gunshot wounds—two to the head and two to the chest—and died while being taken to the hospital, the police source said.

A resident of the ward told Myanmar Now that the man was a retired soldier who became known in the community as a junta informant after last year’s coup.

“Once that got out, he left his home and started staying at a nearby army quarters. He was killed shortly after returning to the neighborhood,” said the resident, who declined to be named for fear of reprisal.

The neighborhood is close to Insein Prison, where four political activists were executed by the military regime late last month.

Relatives of Ko Jimmy, one of the executed prisoners, live in the neighborhood.

A few days after the executions, the military sent thugs to the area to harass Ko Jimmy’s parents at their home. Members of the mob shouted threats and claimed to be related to alleged victims of the executed activists.

Video footage of the scene was widely shared on pro-military social media accounts, suggesting that it had been orchestrated for propaganda purposes.

Area residents accused Myo Nyunt Aung of being involved in that incident and suggested that his murder on Thursday was carried out in retaliation.

Myanmar Now has been unable to independently verify this information.

No group has claimed responsibility for the assassination. Local police did not respond to requests for details on the case.

Underground resistance groups have launched a series of lethal attacks in Yangon in recent days, resulting in the killing of at least three people linked to the junta, including a ward administrator and his wife in Yangon’s Mingaladon Township earlier this week.

In a speech delivered on state media on Monday, junta chief Min Aung Hlaing claimed that more than 2,400 attacks had been carried out in Myanmar’s largest city in the 18 months since the coup.

To counter this, the military has increased its efforts to arm and train pro-junta militia groups in cities and towns across the country.