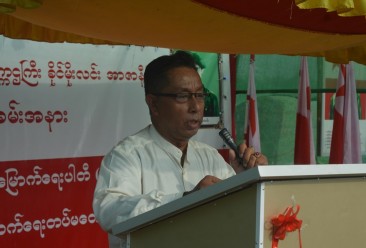 The Arakan Army (AA) has not released a statement or responded to media inquiries regarding allegations that they recently arrested a leader within another Rakhine ethnic armed organisation, the Arakan Liberation Party (ALP).

According to an ALP announcement on Wednesday, Lt-Col Khaing Paw Lin, one of the ALP’s eight central executive committee members, was detained one day earlier by the AA in the Rakhine State capital of Sittwe along with a teenaged boy named Soe Min Naing.

The abduction threatened solidarity between the two ethnic Rakhine organisations, the ALP’s statement said. The group called for the captives’ immediate release and also accused the AA of arresting several other ALP officers and members in the past, alleging that many remained in their custody.

Khaing Paw Lin represented the ALP at “peace talks” with junta officials in Naypyitaw in June. Some 24 Rakhine civil society organisations released a joint statement on May 15 condemning the ALP’s decision to meet with the military.

Citing eyewitnesses, Arakan Princess Media reported that on Tuesday evening, following Khaing Paw Lin’s arrest, a 100-household administrator in the same Sittwe ward of Na Zi was captured by the ALP for his alleged role in the capture.

ALP secretary Khaing Aung Than Soe denied the accusation and said that the administrator, 50-year-old Ba Saw, was arrested by members of the Myanmar army and police who arrived in the area by car.

“It wasn’t us that arrested him. It was the military that did,” he told Myanmar Now.

He said that the same junta troops who apprehended Ba Saw had previously visited the ALP’s office in Na Zi and detained residents of the area, who they brought with them when they took the administrator into military custody.

“People have been spreading rumours that we pretended to be Myanmar army soldiers by wearing their uniforms and that we arrested the man,” he said.

Pe Than, a political analyst and former parliamentarian representing Rakhine State’s Myebon Township, told Myanmar Now that it remained unclear whether the detention of Khaing Paw Lin was motivated by political or personal reasons.

“It’s hard to say exactly why he was captured because no other ALP member was arrested,” he noted.

Myanmar Now contacted AA spokesperson Khaing Thukha for comment on the allegations that his organisation was behind the act, but all calls went unanswered.