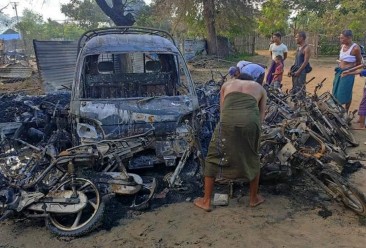 Myanmar army troops operating in eastern Depayin Township in Sagaing Region set fire to the village of Kaing Kan over the weekend, killing at least eight residents in the raid, according to local sources.

A resident of the area and a member of a resistance force both told Myanmar Now that two army helicopters shot at the village on the morning of August 4, dropping soldiers in three to four locations between Kaing Kan and neighbouring In Pin Ya Din who then proceeded to launch a ground assault.

The troops occupied Kaing Kan until Sunday morning, torching it as they left.

“They set fire to a few houses on the first day but torched most of the village on the morning of their departure,” a local man said.

Some 145 of the village’s 300 homes were destroyed, and four bodies were found within the remains of one burned household.

Two more people were found dead in the sewer canal on the outskirts of the village following the raid.

The identities of the six people were not confirmed at the time of reporting.

Soldiers also reportedly shot and killed a 60-year-old man from another Depayin village, Shaw Phyu, and his two sons among dozens taken hostage from the area. Another villager from In Pin Ya Din was also said to have been shot and killed, according to the two local sources.

Myanmar Now is unable to independently verify the number of civilian victims in the assault.

According to the Depayin Township Brothers, a local anti-junta defence force, the military column responsible for the attack was made up of around 80 troops. They identified the soldiers as being from Light Infantry Battalion (LIB) 376, normally based in Kyauktaw, Rakhine State—hundreds of miles southwest of Depayin.

A spokesperson for the resistance group said that in addition to homes, the junta troops also set fire to rice mills, cars, motorcycles and farm equipment in Kaing Kan.

“Nothing at all is left,” he told Myanmar Now.

He said that the soldiers took more than 35 people hostage: 14 from Shaw Phyu, 10 from In Pin Ya Din and 12 from another village, Nagabo.

“They are using the civilians as human shields to prevent an attack [by the resistance] with explosive devices,” the defence force spokesperson said.

At the time of reporting, he stated that the column from LIB 376 was occupying the village of Mu Kan Gyi, also near Kaing Kan.

At least 1,886 civilian homes have been destroyed across the country by the military since the February 2021 coup, according to monitoring group Data for Myanmar. The majority were in Sagaing Region.

The junta has repeatedly denied responsibility for such attacks and has instead blamed the acts on resistance forces.