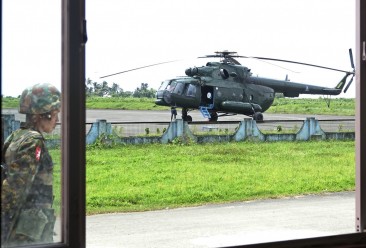 A woman was killed on Saturday as fighting between Myanmar’s military and the Arakan Army (AA) continued through the weekend in northern Rakhine State’s Maungdaw Township.

The shell, which was reportedly fired by junta forces stationed in the nearby village of Kyein Chaung, killed May Thar Sein instantly, according to a man who lives in the area.

“She was getting some firewood from a pile near her house when the shell fell near her. She was killed on the spot,” said the man, who spoke on condition of anonymity.

Later the same day, there were also reports that the military had carried out an airstrike near the village of Hka Maung Seik, more than 30km to the north.

According to a resident of the village, two helicopters were used to carry out attacks in the area, where AA forces had mounted an assault on a tactical base the day before.

“The airstrike was between Nang Yar Kaing and Lay Myo Kayti, but closer to Kayti. We don’t know if anyone was killed or injured,” said the local, referring to two nearby villages.

Myanmar Now has been unable to find out more information about the aerial assault, which reportedly lasted about 30 minutes.

According to teachers at a school in Hka Maung Seik, the two sides clashed for about an hour from around 3pm on Friday, and again from around 2am to 7am on Saturday.

After a shell landed on the school’s staff residence, those staying there decided to flee, said a teacher who did not want to be identified.

“We left the school on our on motorcycles at around 6am, and it was around 9am when we arrived at the Kyein Chaung security checkpoint, where they would not let us pass,” said the teacher.

“We tried to tell them that we were teachers from Hka Maung Seik, but not only would they not let us pass, but they also threatened to shoot us,” he added.

However, soon after they started heading back towards Hka Maung Seik, the group of around 10 teachers heard the sound of heavy artillery as they approached the village of Yan Aung Pyin, which is located about 1km from Min Gyi.

“We decided to go into Yan Aung Pyin to avoid the shelling,” said the teacher, adding that he had also heard reports of casualties in Min Gyi.

The Min Gyi resident who spoke to Myanmar Now about May Thar Sein’s death said that a social welfare group that had come to collect her body was also turned away at the Kyein Chaung checkpoint.

“The township administrator said he’d send a car to retrieve the body, but it never arrived because it couldn’t get past the Kyein Chaung checkpoint,” he said.

The fighting that followed the attack on the Hka Maung Seik base reportedly began after junta reinforcements arrived in the nearby village of Min Kha Maung on Friday evening.

Before leaving later the same night, the column of around 50 soldiers took around a dozen villagers, including a former village administrator, hostage, according to a resident.

“They were taken to be used as human shields, but three of them managed to escape,” said the local, adding that the whereabouts of the remaining hostages was not known.

Neither the Myanmar military nor the AA have released a statement about the latest hostilities between the two sides, which have also affected parts of southern Chin State.

Several civilians have been killed or injured in the latest clashes between the two sides, according to locals