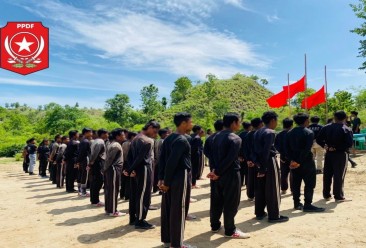 Members of the Pakokku PDF, seen on July 19 (PPDF)

As many as 60 regime forces were killed on Sunday during an assault on troops stationed in a village in Magway Region’s Myaing Township, according to resistance sources.

The attack, carried out by an alliance of 10 local defence forces, targeted soldiers and members of the military-backed Pyu Saw Htee militia based in the village of Twin Ma, the sources said.

Hundreds of resistance fighters reportedly took part in the offensive, which began at around 5am and lasted around 90 minutes.

“We thought it would all be over in 15 minutes, but it went on for more than an hour. In the end we decided to retreat as reinforcements were air-dropped in,” said Lat Yar, a leader of the Myaing People’s Defence Force (PDF).

According to a spokesperson for the Pakokku PDF, there were around 60 soldiers and 90 Pyu Saw Htee members stationed in the village when the attack began, but they were soon joined by troops stationed in Kamma, a village about 6km to the south in Pakokku Township.

“Fourteen military trucks showed up carrying soldiers in commando uniforms. There were hundreds of them. However, one of the explosive devices we set up damaged some of them,” said the spokesperson, adding that four helicopters were also used to transport troops into the area.

While exact casualty figures were not available at the time of reporting, resistance sources claimed that around 60 junta soldiers and militia members were killed in the attack.

Their own losses were much lower, they said—just three dead and five injured.

Myanmar Now could not independently verify these claims.

According to Lat Yar of the Myaing PDF, Twin Ma is one of several villages in the area regarded as Pyu Saw Htee strongholds.

“There are so many Pyu Saw Htee villages around there, but Twin Ma is the main one. They put up fences all around the village and built bunkers and trenches as well as foundations for mortars inside the school,” he said.

According to state media reports, 11 people, including two children and a middle-school teacher, were killed in the clash, and 12 more were injured.