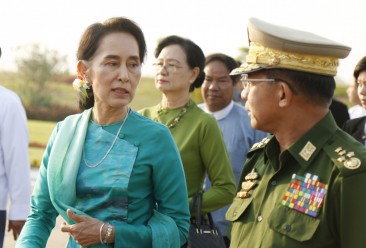 In the days that followed last year’s coup, State Counsellor Aung San Suu Kyi reportedly rejected military efforts to strongarm her into capitulating to the attempted seizure of power, Myanmar Now has learned.

According to a source close to the Naypyitaw closed court where her legal proceedings are ongoing, the detained leader of the elected National League for Democracy (NLD) government was asked to tell her party to back down from their criticism of the junta.

The individual revealed that on February 9, 2021, Suu Kyi was visited by two generals at her Zabuthiri Township residence, where she had been placed under house arrest in the early morning hours preceding the February 1 coup.

The officers reportedly requested that the 77-year-old make a public statement calling on striking civil servants to return to work, and the public to halt protests against the military.

When she refused, the source said, the junta representatives asked Suu Kyi to read out a one-page declaration that they had prepared. Through the document, she would declare that she was safe and in good health and would ask the NLD to stop issuing anti-coup statements.

Suu Kyi allegedly described herself as a government official and told the generals that she had not been involved in the party affairs of the NLD since November 6, 2020, three days before the country’s general elections.

The source revealed further information taken from several of Suu Kyi’s court statements delivered in response to the charges laid out against her over the past year-and-a-half.

Her hearings are held within the Naypyitaw prison compound where she is also incarcerated.

Several people, including another member of the ousted NLD government, have been filmed reading out statements—presumably prepared by the military—in footage which has then been broadcast on junta propaganda channels.

Such testimony was delivered by NLD-appointed Yangon Region chief minister Phyo Min Thein both on video and in court on October 1, 2021, when he was called as a witness in Suu Kyi’s first junta hearing on four corruption charges. He claimed that he had bribed the State Counsellor with US$600,000 and 11.4kg of gold in exchange for protection and business support.

She was subsequently handed a five-year prison sentence. At the time of reporting, Suu Kyi had been convicted of 10 charges totalling 17 years in prison, with nine more pending.

On March 1, three weeks after she refused to comply with the junta’s requests, the military began filing lawsuits against Suu Kyi related to the demands.

Citing the release of anti-coup statements posted on the Facebook pages of the NLD and its party chair, the junta charged her with incitement. She was later convicted, despite already being under house arrest at the time the sentiments were published, her electronic communication devices confiscated.

It was not until May that she was first allowed a private meeting with her legal team, a session which lasted 30 minutes.

Later that month, she was transferred from her home to an undisclosed location, and finally, into a 13-by-14-foot building within the Naypyitaw Prison compound on July 23 of this year. There, the court source said she had been struggling with exposure to rain, heat and insect bites.

While Suu Kyi was arrested by the military at 4am on February 1 last year, the President of her administration, Win Myint, was targeted one hour later, the same court source said.

Armed soldiers reportedly surrounded his home, woke him, and forced him to meet them in his office, located adjacent to the residence. There, two generals are said to have called for him to tender his resignation, citing poor health.

Win Myint, 71, allegedly responded that he “would rather die than resign,” prompting the officers to threaten him with “personal harm.”

Like Suu Kyi, his communication devices were confiscated. He was notified that he would need to exit his home within three days.

The President and his family moved into another government residence on the evening of February 4, where they remained under house arrest. He was sent to another site on May 23, where he reportedly remains.

The source said that the military has concealed Win Myint’s current location even from the President himself by covering all windows on the premises.

He has already been convicted of two of eight criminal charges levied against him, and faces four years in prison.

A handwritten order to the NLD by military-commander-in-chief Min Aung Hlaing on January 28, 2021, proved later to be a warning of the impending coup. The directive, which later went viral on social media, forbade the Parliament from convening on February 1, the day he later attempted the power grab.

Nearly a year later, in December, the junta chief said ambiguously that Suu Kyi, in military detention, should make a public statement on Myanmar’s “current political situation”—she did not.

The move was seen as another attempt to get the State Counsellor to call off the anti-coup resistance.

During an August 17 meeting in Naypyitaw with UN Special Envoy on Myanmar Noeleen Heyzer, Min Aung Hlaing only committed to “considering” a request by the diplomat to meet with Suu Kyi and to transfer the State Counsellor from prison back into her home. First, he said, her court hearings would need to be concluded.

In 2019, while Suu Kyi served as the de-facto head of the elected NLD administration, she defended the military at the International Court of Justice after charges were brought against Myanmar for the genocide of the Rohingya minority in 2016 and 2017.

A former officer in Myanmar’s previous military administration told Myanmar Now that the leadership of the armed forces had simply been “using” Suu Kyi to maintain their own hold on power.

Min Aung Hlaing, he alleged, “does not see her as his way out” of politics.

Suu Kyi had previously been placed under house arrest for a total of 15 years under the junta headed by Than Shwe, between the years of 1989 and 2010. She was also targeted in a military assassination attempt in Sagaing Region’s Depayin Township in 2003.

“Than Shwe only detained her, but the current junta chief appears to be trying to eliminate the NLD,” the officer said.