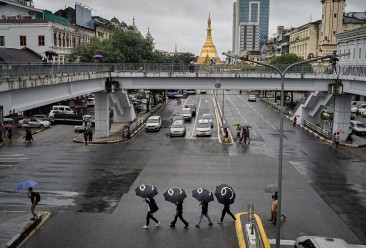 The junta-controlled Supreme Court approved a petition from Aung San Oo, the estranged older brother of Aung San Suu Kyi, to sell the detained State Counsellor’s Yangon home on August 22. In 2000, while Suu Kyi was under house arrest, her brother sued her for ownership of the colonial-style residence at 54 University Avenue, located on the shores of Inya Lake. In 2016, a Yangon court ruled that the house and half of the nearly two-acre property that it sits on belonged to Suu Kyi, while her brother owned another building and the rest of the land.

An attempt to overturn the decision through an appeal to sell the property and share the revenue was later rejected by the Supreme Court. The case was reopened again earlier this year when the junta, which is holding Suu Kyi in solitary confinement at the Naypyitaw Detention Centre, received Aung San Oo’s petition. The land was given to their mother Khin Kyi in 1947 by the government of that time following the assassination of her husband, Gen Aung San. The property is reportedly worth millions of dollars.

The Cobra Column, an anti-regime armed group that operates under the command of the Karen National Liberation Army, announced on August 23 that it had abandoned a frontline camp in Karen State’s Myawaddy Township. It said it made the decision after coming under sustained air and ground attacks. In addition to fighter jets, Myanmar’s military has reportedly used a Multiple Launch Rocket System—an automatic artillery firing platform—to attack Karen resistance forces in the area.

A protester and a freelance photographer who marked the 34th anniversary of the 1988 pro-democracy uprising on August 8 by displaying umbrellas with the number eight printed on them in Burmese were arrested on August 20, according to a pro-junta Telegram channel. Opened side by side to show 8-8-88—or August 8, 1988—the umbrellas were photographed near a number of key landmarks in Yangon as a silent protest against last year’s coup.

“Han Nyein Oo,” a pro-regime Telegram channel, published photos of two youths forced to kneel down with the same umbrellas and a protest banner near them, one of them with his face covered in blood. Yangon People’s Strike, the group that organised the event, confirmed that a member and freelance photographer Sit Min Naing had been arrested in two separate raids. Camera equipment, computers, and cash were also seized, the group said. Despite bans by most social media platforms, the junta still has free access to Telegram, Myanmar Now has learned.

The military council’s department of examinations under the education ministry announced on August 23 that it would offer a retake of matriculation exams in 2023 for those who failed or did not sit for the test in March, with applications from test-takers accepted throughout the month of September. The move has been criticised by those who have boycotted the education system under the junta as another attempt by the military to legitimise its administrative mechanism and seizure of power.

The UK announced a further round of sanctions against three Myanmar military-linked businesses on August 24, including Sky One Construction, in which junta chief Min Aung Hlaing’s son is a director. Also sanctioned by the UK government are two arm dealers: Star Sapphire Group of Companies and the International Gateways Group of Companies, Ltd. The economic restrictions are part of an effort to limit the military’s access to arms and revenue. Sky One reportedly won several contracts to build junta projects as well as to expand the army’s air bases.

Former journalist Zaw Zaw from Mandalay was sentenced in a junta court to three years in prison for incitement under Section 505a of the Penal Code over a Facebook post, according to a relative. Zaw Zaw, a photojournalist who quit his job with news outlet The Irrawaddy after last year’s coup, disappeared after he was taken into military custody on April 9. He was later transferred to Obo Prison after being held at the notorious Mandalay Palace interrogation centre for more than one month.

An explosion went off at a junta administration office in Yangon’s North Okkalapa Township on the night of August 26, killing at least three people—two administrators and a reserve firefighter—according to a local woman. An urban guerrilla group called the Union of Myanmar Civil Defence claimed responsibility for the explosion and said that its members set off the bomb after they had established that plainclothes soldiers were in the proximity.

On August 25, another explosion occurred at a junta court in Mayangone Township, also in Yangon, injuring at least two people. A guerrilla group called Generation Y Guerrilla (GYG) claimed responsibility for the incident.