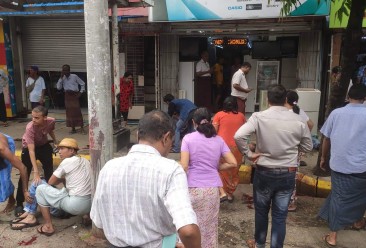 A bomb went off in downtown Yangon on Tuesday afternoon, killing one man and injuring nine others, according to the social welfare group that brought them to the commercial capital’s general hospital.

The explosion occurred at around 3:30pm near a crowded bus stop located at the intersection of Anawrahta Rd and 35th St in Kyauktada Township, eyewitnesses told Myanmar Now.

The identity of the individual who died in the blast had not been confirmed at the time of reporting.

Around 200 soldiers, police and firemen sealed off the area surrounding the site of the explosion and carried out searches, one of the eyewitnesses said.

A resident of 35th St told Myanmar Now on Tuesday evening that junta troops had reportedly found two more bombs and set them off in controlled blasts.

“They were saying there were four bombs. I don’t know how they knew that,” the individual said. “One of the bombs injured people and two more were blown up by [the military] to dispose of them. They were looking for one more.”

Soldiers at the scene forced businesses along Anawrahta Rd to shut for the day, closed the street to traffic, and barred residents from leaving the area, he added.

Two other sources in the neighbourhood confirmed that they had heard two additional loud blasts before 5pm.

Following the military coup in February of last year, the former capital saw a series of guerrilla attacks against junta targets, including troops and military-appointed administrators.

However, at the time of reporting, no urban guerrilla forces had claimed responsibility for the most recent bombing.

In a statement on Tuesday evening, the defence ministry of the civilian National Unity Government (NUG) denounced “such a violent attack that targets civilians.”

Naing Htoo Aung, the ministry’s secretary, told Myanmar Now that no groups operating under the command of the NUG were responsible for the explosion.

“I believe such moves were carried out to perpetuate misunderstanding between the public and the People’s Defence Force and the NUG,” he said, referring to the forces making up the administration’s armed wing.

In his own statement, the NUG’s minister for international cooperation Dr Sasa vowed to “make sure the perpetrators [were] brought to justice.”

A spokesperson for the NUG’s Yangon Region Command, which has been carrying out attacks against junta targets, also condemned the incident and said they would retaliate against those responsible.

“This explosion is a scheme masterminded by the terrorist military council that wants to misportray our resistance movement,” the command’s spokesperson told Myanmar Now.

As of 6pm on Tuesday, the military had not released any information regarding the bombing.