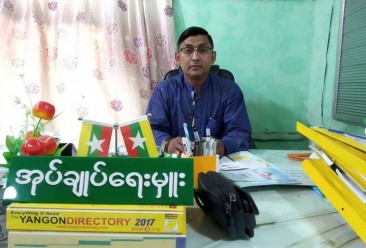 Bobby, also known as Than Win, is pictured in his office in 2017 (Myanmar Now)

A junta administrator from Yangon’s Botahtaung Township survived being shot multiple times at close range by guerrilla fighters last week after they targeted him for his alleged role in facilitating the infamous 44th Street military raid nearly one year ago.

Eyewitnesses told Myanmar Now that 48-year-old Than Win, commonly known by the nickname Bobby, was approached by two young men on the corner of Merchant Rd and 42nd St on the afternoon of July 28. They reportedly opened fire as he tried to take cover behind a nearby vehicle.

“He realised that he was going to be attacked and ran between two cars, but the youth chased him down and shot him from both sides of the cars and he fell,” an area resident explained.

Bobby was reportedly hit in the neck, shoulder and hip and was undergoing treatment for his injuries at the Mingaladon Military Hospital after being transported there by a vehicle provided by his own charity group.

He became the administrator for Botahtaung’s seventh ward seven years ago, holding the position under governments led by the military-backed Union Solidarity and Development Party (USDP) and the National League for Democracy (NLD) which was elected in 2015, as well as under the coup regime that ousted the NLD in early 2021.

A member of the Inya Urban Force (IUF), an anti-junta resistance group that claimed responsibility for the shooting, said that Bobby was targeted for assassination due to his alleged role in a military raid on a 44th St apartment last August. During the incident, five activists fell from the roof of the three-storey building as it was stormed by regime troops, two fatally. Those who survived were hit with heavy criminal charges for the alleged possession of explosives.

According to the IUF and multiple ward residents, the youth were tracked down with information provided by Bobby, the ward administrator.

“There was an explosion while the protesters staying in a room on 44th St were testing a bomb,” a man who lives in Ward 7 said. “That same evening, Bobby led the junta personnel straight to them.”

Myanmar Now was unable to independently verify the accusation.

The IUF’s plan to avenge the deaths of the 44th St victims by assassinating Bobby had been repeatedly delayed due to information leaks on social media, the group’s representative added, noting that the administrator’s neighbourhood was heavily guarded by junta forces.

“We decided to wait until he was not expecting it,” he explained. “We have the ability to defeat the enemy no matter where they are… Administrators still serving under the junta should resign immediately if they don’t want to face the same fate.”

‘I am a very fair and just person’

Like many residents of Botahtaung’s Ward 7, Bobby is a Muslim, a religious minority long persecuted through institutionalised discrimination in Myanmar. Yet he had built ties with military entities known to back the same Buddhist ultranationalists who had championed anti-Muslim legislation, serving as a member and local organiser within the USDP following his release from prison in the early 2000s due to a drug conviction.

He was involved in later lawsuits including one filed by 10 locals with the President’s Office in late 2017 accusing Bobby of stealing 100 bricks that had belonged to the government. The case was dismissed when Bobby filed a countersuit against the plaintiffs, including an additional defamation charge against one of the individuals for posting about the incident in question on Facebook.

Myanmar Now inquired about the accusation of theft during an interview at his office in which he claimed that he had used the bricks for the “wellbeing of pedestrians,” but did not elaborate on what this entailed.

“I just wanted to do good deeds. I am a very fair and just person and I would bet my life on my own morals,” he said at the time.

He refused to comment on court records suggesting that in 2005, he was also convicted of illegally using electricity, sentenced to six months in prison and fined 10,000 kyat.

Days before the attempt on his life, Bobby’s neighbours reported that he had been seen recruiting men to serve in the military-backed Pyu Saw Htee militia network—a claim which Myanmar Now was unable to independently verify.

One of the residents of Botahtaung’s seventh ward said that he felt no sympathy for the ward administrator regarding the injuries he endured in the recent assassination attempt, but was concerned that upon recovery, Bobby would be more aggressive in his pursuit of those involved in the anti-junta resistance movement.

“I’m very worried he might continue being a military informant out of vindictiveness,” he said.