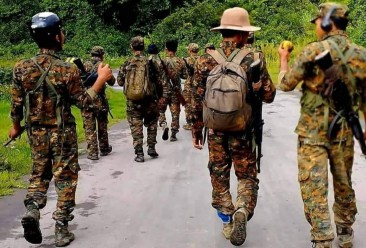 An alliance of ethnic Chin guerrilla groups ambushed a Myanmar army base between Hakha and Thantlang townships last week, claiming to have killed 10 junta soldiers.

Members of the Chinland Joint Defence Committee (CJDC) launched the attack on the site near the Themis stream on August 11, the coalition’s general secretary, Salai Timmy, said.

Myanmar Now is unable to independently confirm further details about the assault.

Salai Timmy added that an 80-soldier junta column from the base in question had been attacking villages around Hakha, the Chin State capital, including Mee Chaung and Sa Mee Chaung, as well as in Matupi Township.

Villagers from Saung Wa, a community located next to Sa Mee Chaung, had also been subjected to interrogations by the troops, a local source said.

He told Myanmar Now that he believed the junta was trying to establish a permanent presence in the area.

“I think they’re trying to seize control of the area in order to help the military council operate their government mechanism in the area,” he said, adding, “They’re sending more reinforcements so that the Chin defence forces can’t operate in the area.”

Some 220 battles have taken place between the CJDC’s forces and those of the junta since February, the coalition said in an August 11 statement.

Of those clashes, more than half were in Hakha, Falam and Mindat townships.

The military council has not released information regarding the fighting in Chin State, where it has also been widely accused of torching homes.

In Thantlang alone, the township’s Placement Affairs Committee stated in late June that more than 1,300 houses had been destroyed by the Myanmar army in some 28 arson attacks since the February 2021 coup.

Ongoing battles, combined with the transportation difficulties regularly faced by Chin State locals during the rainy season, have made food and commodities scarce, residents have said.