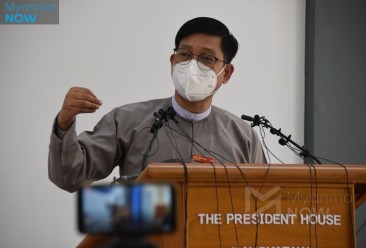 Myanmar’s former presidential spokesperson Zaw Htay died of a heart attack on Monday morning in Naypyitaw, according to sources close to him.

The 48-year-old collapsed at home and was pronounced dead at Naypyitaw’s 1,000-bed hospital, a source in the junta administrative capital told Myanmar Now.

He is survived by a teenage daughter.

Junta spokesperson Gen Zaw Min Tun, who graduated alongside Zaw Htay in the 37th intake of the Defence Services Academy, told local news outlet Eleven Media that Zaw Htay had passed away at around 9am.

Also known by his pen name Hmuu Zaw, Zaw Htay was widely perceived as a controversial figure, having served as spokesperson for rival governments.

From 2016 until 2021, he was the director-general of the offices of the now-detained State Counsellor Aung San Suu Kyi and ousted President Win Myint within the National League for Democracy (NLD) administration.

The former army major was also a presidential spokesperson for the Thein Sein-led government under the Union Solidarity and Development Party (USDP), a military proxy party which held office prior to the NLD.

After serving within the USDP, Zaw Htay’s reappointment to the NLD government was criticised by some party supporters who accused him of acting as the “military’s source” within the new administration.

Zaw Htay was condemned by international rights activists for his public defence of 2017 military atrocities in Rakhine State that forced some 700,000 Rohingya Muslims to flee to Bangladesh. In his capacity as the NLD government spokesperson, he claimed that the armed forces had been legitimately responding to a “terrorist” threat. He openly rejected UN findings calling for those responsible for the grave abuses against the Rohingya to face genocide charges.

Zaw Htay also later used the “terrorist” label to refer to the Arakan Army (AA), which he promised would be “crush[ed],” as clashes and tension between the ethnic armed group and the military escalated in 2019. He similarly accused other ethnic forces allied with the AA, including the Ta’ang National Liberation Army and the Myanmar National Democratic Alliance Army of terrorism.

Zaw Htay was last seen publicly at a President Office’s press conference in Naypyitaw days before the military staged a coup on February 1, 2021. The attempted seizure of power was carried out amid claims by the USDP that the NLD had committed electoral fraud in the 2020 national polls.

The spokesperson defended the then-ruling NLD’s re-election victory at a January 8 press conference where he dismissed allegations of voter fraud as “false claims” and an act of “political suicide.” He pointed to the party’s previous wins in 1990 and 2015 as evidence of its popularity.

Days after the coup, Zaw Htay resigned from his position, according to a source close to him. He was reportedly arrested and spent nearly four months in a military interrogation centre before finally being released in early June last year.