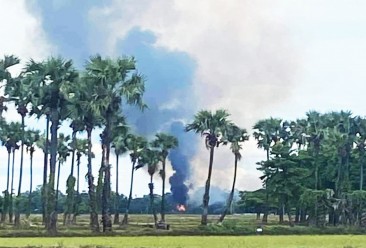 Some 80 soldiers from the Rakhine State-based Light Infantry Battalion 376 were initially airdropped near Kaing Kan village on August 4, burning nearly half of the community’s 300 homes and killing at least eight area civilians.

Myanmar Now reported on Wednesday that the unit took an estimated 35 people hostage from the neighbouring villages of Shaw Phyu, In Pin Ya Din and Nagabo, and went on to occupy Mu Kan Gyi.

Myanmar Now has learned that the number of hostages may be as high as 50, and the troops who captured them arrived in Mu Kan Gyi at around 10am on Monday, according to sources in the resistance.

The military column broke into three units before entering the village from the south, according to Thein Ngat, a leader of Mu Kan Kyi’s local anti-junta defence force. They appeared to have been tipped off regarding the guerrilla group’s placement of explosives outside the village and circumvented the trap, he said.

“We were waiting for them with a minefield we had set up, but they forcibly entered the village, randomly firing heavy weapons, so there wasn’t even a proper battle,” Thein Ngat explained. “They managed to avoid the explosive devices.”

He speculated that the troops had been assisted by a “very reliable informant.”

While most of Mu Kan Gyi’s residents managed to flee prior to the raid, some villagers were still believed to have been captured during the subsequent occupation, Thein Ngat added.

A spokesperson for another area resistance group, the Depayin Township Brothers, told Myanmar Now that the soldiers had torched around 60 homes in Mu Kan Gyi by around 3pm on Monday, but the fires continued on Tuesday, as they continued to occupy the site and detain the civilians.

“They are using them as human shields,” the spokesperson said, adding, “They are known to burn the bodies of the people they have killed along with the houses, so we are worried for the lives of these hostages.”

Thein Ngat said that his own defence force was made to retreat after the military fired at them from the cover of local homes.

On Tuesday, he told Myanmar Now that the arson was ongoing.

“The fire is very big and they are torching the houses in three separate spots. There is so much smoke,” he said.

The total number of homes destroyed in Mu Kan Gyi was not confirmed at the time of reporting. However, this week’s assault marked the second time that the village was targeted in recent months; on June 24, Mu Kan Gyi was also raided by the military, at which time, a local resistance fighter was killed and some 200 houses burned.

“I understand revolutionary fighters dying during battles. It’s a war after all. However, terrorising civilians and torching houses is just inhumane,” the Depayin Township Brothers’ spokesperson said, condemning the attacks.

Nearly 19,000 homes have been burned down nationwide by the military since the February 2021 coup, according to monitoring group Data for Myanmar; the majority of the residences were in Sagaing Region.

The junta has denied responsibility for the attacks and rarely releases information on its ongoing offensives and raids in northwestern Myanmar.

Junta forces airlifted into Depayin Township burn half the homes in a village and take dozens of people hostage, locals say