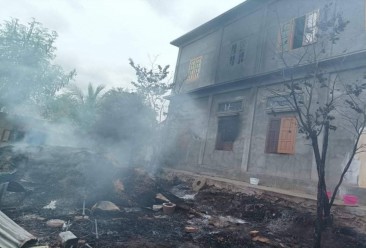 Myanmar’s military killed eight civilians during a raid on a village in Sagaing Region’s Myinmu Township last week, according to local sources.

The raid, which targeted the village of Letpan Kyin on August 1, involved both air and ground attacks and also resulted in the deaths of 10 resistance fighters over the next two days, the sources said.

More than 100 civilians—at least 60 of them children from a school run by the National Unity Government—captured during the raid were released the next day, they added.

At least half of the more than 100 civilians captured during a raid on Monday were children, according to resistance sources

At the time, the Myanmar junta said in a statement that five members of a local defence force had been killed in the raid—a claim rejected by resistance sources, who said that all of the casualties were civilians.

However, a clash that took place on August 2 left two resistance fighters dead, and another the following day resulted in the deaths of eight more, the sources said.

The eight who were killed on August 3 were reportedly intercepted by a unit of army scouts as they were travelling by car to Letpan Kyin to provide backup for the resistance forces already there.

“Around 20 junta soldiers opened fire on their car until they ran out of bullets. They used automatic weapons, so the victims couldn’t even get out of their car. Our comrades fired back and managed to injure two junta soldiers,” said Lu Lin, a spokesperson for the Myinmu City Revolutionary Force.

After seizing weapons from the vehicle, the soldiers set it on fire. This detonated some explosives that were still inside the car, resulting in extensive damage to most of the bodies, he added.

“Only two were not completely disfigured. The rest had their heads or lower bodies blown off,” said Lu Lin.

Most residents of Letpan Kyin have yet to return to the village due to fears that the soldiers might return. Those who have gone back say that 15 houses there were destroyed, along with five cars and at least 20 motorcycles.