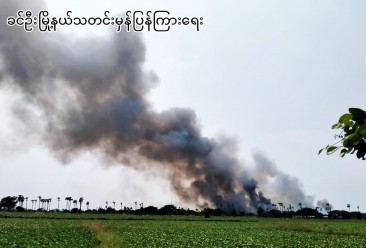 A 70-year-old man was killed on Wednesday after the military fired both heavy and light weapons into his village in Sagaing Region’s Khin-U Township.

Kun Thee had been hiding in his house in Kan Thit village when it was hit by an artillery shell at around 7pm, another resident of the community said.

The rest of the locals already fled as a seven-vehicle junta convoy travelling through Khin-U—en route from Shwebo to Ye-U—shot at and raided a number of homes along the road. Residents of some 12 villages, including Kan Thit, were displaced by the assaults.

“The old man couldn’t run, so he stayed behind. He was arrested once before, too,” the Kan Thit villager said, adding that Kun Thee’s son had also been previously arrested and was reportedly in prison at the time of the attack.

Anti-junta defence forces used improvised explosive devices to intercept the military vehicles at a curve in the road near Kan Thit, locals said, and noted that accompanying the convoy was a new junta-appointed local administrator.

The Khin-U People’s Defence Force (PDF) released a statement on Wednesday reporting that they and their allies were able to safely withdraw from the battle that followed, and warned residents of Depayin, Khin-U, Taze and Ye-U townships that a major Myanmar army assault on the area could be forthcoming.

Junta forces have been raiding villages in Khin-U throughout May, and frequently clashed with resistance groups. After such battles, military columns are known to bombard villages in the surrounding area with both heavy and light weapons.

On May 19, five civilians were killed and 13 more were injured after an artillery shell fired by the military landed on a crowd of internally displaced persons near Tar Taing village in Khin-U Township. They had gathered on the eastern shores of the Muu River and were reportedly watching to see if their village on the opposite side bank—Pauk Thar—would be targeted in arson attacks by junta troops as fighting occurred one mile away in Depayin Township.

According to the monitoring group Data for Myanmar, as of May 1, a total of 11,417 homes had been destroyed in military attacks nationwide, of which some 972 were in Khin-U Township.