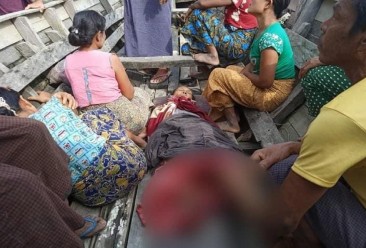 A 75-year-old resident of northern Rakhine State’s Kyauktaw Township died after stepping on a landmine on Tuesday morning, according to local sources.

Ma Tin Thein was reportedly foraging for edible plants on a hill at 7am just outside of her village of Yoke Thar when she accidentally set off the mine. The explosion caused her to immediately lose her right leg above the knee and severely injured her left leg, an eyewitness said.

“A farmer from the area notified the villagers after the elderly lady fell down the hill after triggering the landmine,” a man from Yoke Thar told Myanmar Now. “We went to pick her up and tried to send her to the Kyauktaw hospital, but she died right after we loaded her onto the boat,” he added.

Yoke Thar, which has 250 households and a population of nearly 1,000, is located on the western shore of the Kaladan River, more than two miles outside of Kyauktaw town.

The villager said that Ma Tin Thein had planned to sell the wild vegetables she had collected, noting that her family was impoverished and made their living doing odd jobs and day labour.

“Her family didn’t want her to go and forage for plants there, but she wanted to do it to earn some extra money. Three oxen had already been killed by landmines on that hill,” he explained.

The village and hill were occupied by the Myanmar military in 2019, locals said.

That year, soldiers came to the Yoke Thar and rounded up more than 60 residents—including women and children—and reportedly held them in the monastery for days without sufficient food.

“They also went to that hill to carry out ‘clearance’ of the area. I think those landmines are the ones that they set up,” said another man from Yoke Thar, who was among those detained three years ago.

He said that Ma Tin Thein would be cremated at the cemetery in Kyauktaw town, as the Myanmar army had also reportedly mined the area around Yoke Thar’s cemetery.

“There’s a cemetery specifically for people who have died accidental and sudden deaths, but we aren’t able to go there because the military also set up landmines there. So we just sent the body to the morgue at the Kyauktaw hospital,” the local man added.

“A girl lost both of her legs in 2019 as well. One of the military’s own soldiers was also killed by those landmines in March,” he said.

The junta’s No. 9 Military Operation Command is stationed east of Yoke Thar, across the Kaladan River.

Myanmar Now tried to contact junta officials to comment on the allegations that they had placed landmines in civilian areas of Kyauktaw, but all calls went unanswered.

An ethnic Khumi youth from Paletwa Township in southern Chin State, across the state border from Rakhine’s Kyauktaw, also stepped on a landmine and lost his leg on Sunday. The blast occurred while he was returning from his farmland on a hill one mile outside of his village of Nga Char, locals said.

At the time of reporting, he was being treated for his injury at a hospital in the Rakhine State capital of Sittwe.