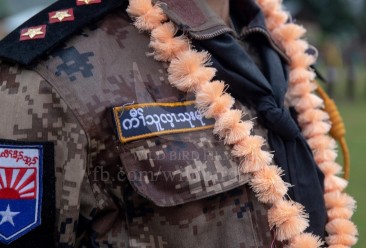 The Karen National Union (KNU) and Democratic Karen Buddhist Army (DKBA) recently agreed to reunify as the Kawthoolei Armed Forces, according to a KNU representative.

“We have made a verbal agreement,” KNU spokesperson Padoh Saw Taw Nee told Myanmar Now. “The KNU and the DKBA are starting to wear the badges of the Kawthoolei Armed Forces.”

A KNLA officer who spoke to Myanmar Now on the condition of anonymity said that he was “very happy” about the development.

“All of the Karen organisations are operating with the same goals in mind. These badges are the first step towards our reunion,” he said. “It’s very upsetting to see that different Karen groups are scattered all over Karen State… We need to make it our common goal to take down our common enemy—the military dictatorship.”

Meeting records seen by Myanmar Now confirm that talks were held between a total of 14 personnel from the KNU, KNLA and DKBA on August 3.

It was agreed in the meeting that DKBA commander Gen Saw Steel would take responsibility for discussions with the military to end assaults on Karen territory, the documents said. However, if the attacks continued, the DKBA and the KNU would collaborate to hold off the junta’s forces.

“We generally agreed that we would fight against the military together if this fails,” the KNU’s Padoh Saw Taw Nee said of the talks with the DKBA.

Sources within the KNU claimed that Gen Saw Steel came under pressure from the Myanmar military immediately following the August 3 meeting. One day later, a statement signed by the DKBA chief said that the group no longer agreed with the decision to hold talks with the military.

The Kawthoolei Armed forces is not to be confused with the similarly named Kawthoolei Army, a group formed last month by ousted KNDO commander Saw Nerdah Mya and not recognised by the KNDO or KNLA.

The DKBA was founded 1994 after several Buddhist KNU leaders left the organisation, claiming that the KNU favoured Christian members.

At that time, the KNU’s central committee had released a statement declaring the DKBA an enemy of its organisation, but reportedly repealed the statement during the meeting earlier this month.

Political analysts have speculated that the DKBA had some 6,000 troops when it was created, but that around 1,500 remained, with the majority having split to join a military-backed Border Guard Force.

The DKBA operates to the east and west of the Dawna Hills in Karen State.