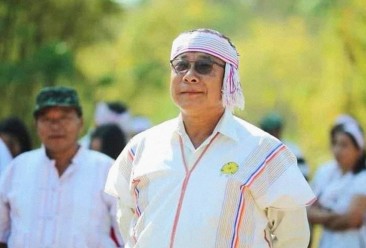 The leader of a group representing the Kayan people was shot and killed near his home in southern Shan State’s Pekhon Township on Thursday, according to local sources.

Francisco, also known as Saya Ko, was the chair of the Kayan Literature and Culture Committee, a group that promotes the culture of the Kayan people, an ethnic Karenni sub-group.

He was killed near his farm in Naung Lai, according to a resident of the village who spoke to Myanmar Now on condition of anonymity.

“Two gunmen approached him at his farm in the northern part of the village. No one has claimed responsibility for the killing, due to the complicated political situation,” he said.

Baham Htan, an ethnic Kayan who serves as the deputy minister for human rights in the civilian National Unity Government, called the assassination a great loss for the Kayan people.

“It breaks my heart,” he said in a post on social media.

The Kayan Literature and Culture Committee also released a statement condemning the killing, saying that it was not the way to resolve political disputes.

In 2010, he was elected to represent Pekhon Township in the Pyitthu Hluttaw, or lower house of parliament, as an MP for the military-backed Union Solidarity and Development Party (USDP).

He ran again for the same seat as a USDP candidate in 2015 but lost. He also made an unsuccessful bid as the party’s candidate for Kayan ethnic affairs minister in Shan State in 2020.

There are around 80,000 Kayan people living in Shan State and another 70,000 in neighbouring Karenni (Kayah) State.