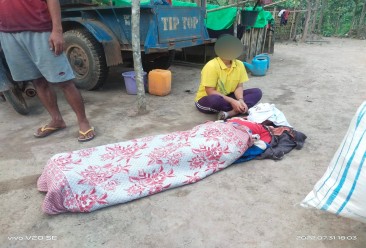 A displaced villager watches over the body of Margaret, a 13-year-old girl killed by a Myanmar army shell on July 31 (Supplied)

A Myanmar army shell fired at a camp for displaced villagers killed a 13-year-old girl and her father in Karenni (Kayah) State’s Demoso Township on Sunday, according to resistance sources.

The girl, identified only as Margaret, died instantly when a piece of shrapnel from the 120mm shell hit her in the head, said a spokesperson for the Demoso People’s Defence Force (PDF).

Margaret’s father, who suffered similar injuries, died the next day, he added. Her 17-year-old brother and her uncle were also injured in the explosion, but are both in stable condition.

“All four of them lived in the same house. The shell fell while they were chatting together,” the spokesperson said, adding that another piece of shrapnel landed some 800m away, slightly injuring a nine-year-old boy who also lives in the camp.

“There was no fighting going on at the time, so it’s safe to assume that they were targeting the camp,” he told Myanmar Now on Monday.

There are also junta troops stationed in at least seven wards and villages in and around the towns of Demoso and Nan Mei Khon, he added.

According to the Progressive Karenni People’s Force (PKPF), a local youth organisation, a total of 255 civilians have been killed by junta forces in Karenni State and southern Shan State’s Pekhon Township since last year’s coup.

At least 38 of these victims were people displaced by the conflict, the PKPF said.