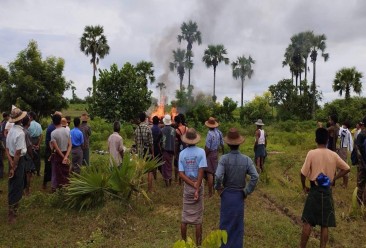 Junta forces operating in Sagaing Region’s Kani Township killed five local defence force members on Friday, according to the leader of an anti-regime group active in the area.

The resistance fighters were not engaged in battle at the time of the incident, which occurred on the Monywa-Kalay highway, the defence force leader said.

“They were shot dead while they were taking shelter near a betel nut shop, as it was raining heavily. Their cars were torched as well,” he told Myanmar Now.

Some of the victims, who were all young men in their 20s and 30s, were shot at close range, he added.

Two of the victims belonged to a group called Yoma Fighter, but the identities of the other three and their respective organisations were not known at the time of reporting.

Photos of two dead bodies, along with three cars and a motorcycle that were destroyed in the attack, have circulated widely on social media.

The junta troops responsible for the killings had been stationed in the village of Zee Pin Twin, where they had reportedly burned down 20 houses during a two-day occupation.

It was after they left the village on Friday and were passing Chaung Ma, another village less than 10km to the east, that the regime soldiers killed the resistance fighters, according to local sources.

On Saturday morning, the column of around 100 soldiers was seen heading north from Chaung Ma. Some sources reported clashes near the village of Min Ma, about 6km north of Chaung Ma, but this could not be confirmed.

The incident comes amid an ongoing offensive by junta forces in three townships west of the Chindwin River in southern Sagaing.

On August 11, the military launched airstrikes against Yin Paung Taing, a large village in Yinmabin Township, and has since carried out attacks on other villages in the area, including in Kani and Pale townships.

According to local sources, the fate of around 30 Yin Paung Taing residents who were taken hostage two weeks ago remains unknown.

Thousands of people living in the area have been displaced by the military’s campaign against local defence forces active in the area, resistance sources said.

Military columns in Myanmar’s heartland raid some 20 villages in three townships west of the Chindwin River, displacing much of the local population