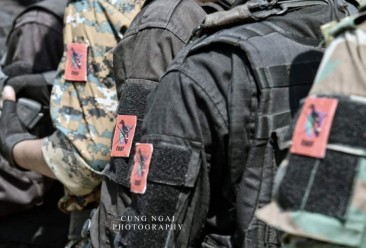 Members of the CNDF, one of the armed groups that took part in an attack on a Myanmar army base in Rihkhawdar on August 10 (CNO)

At least five regime troops, including one officer, were killed in an assault on a Myanmar military base in Chin State’s Falam Township on Wednesday, according to resistance sources.

The attack, which targeted a hilltop base in Rihkhawdar, a town on Myanmar’s border with India, was carried out before dawn on Wednesday by several anti-regime groups active in the area.

According to a senior member of one of the groups involved, the Chin National Defence Force (CNDF), there was at least one army officer among the confirmed junta casualties.

“I was told that an officer, Lt-Col Wai Myo Paing, was killed, but we still don’t know the identity of the others. I received this information from a trusted source within the military,” he said.

A spokesperson for the Chinland Defence Force (Civil Defence Militia) Siyin, another group that took part in the attack, said that four soldiers also defected after surrendering to the anti-junta forces.

“Four of them joined our side, but they didn’t have their weapons with them,” said the spokesperson.

According to local sources, at least one civilian—a man identified as Liang Thang Mang—was killed and two others were injured when an artillery shell fired from another nearby base landed in a residential area.

The resistance forces, who reported only one injury among their members, said they ended their attack and retreated after coming under fire from the other base.

Residents of the area told Myanmar Now that they saw military jets pass over Rihkhawdar at least four times in the hours after the fighting ended at around dawn.

According to the CNDF, weaponised drones were used in the attack on the base.

Myanmar’s military bolstered its presence in the area earlier this year, after the junta-appointed chief minister for Chin State, Ngun San Aung, told regime leader Min Aung Hlaing at a meeting in Naypyitaw in February that local defence forces were collecting taxes near Rihkhawdar’s commercial hub.

Since then, the two bases in the town have been repeatedly targeted by resistance groups operating in the state.

Members of the CNDF, one of the armed groups that took part in an attack on a Myanmar army base in Rihkhawdar on August 10 (CNO)