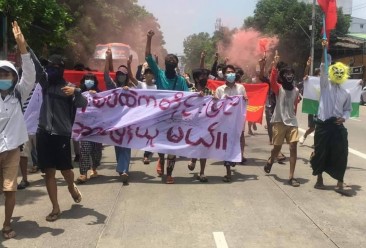 Five teenagers suffered multiple injuries after regime soldiers plowed their vehicle into them following a flash mob protest in Yangon on Monday, according to activist sources.

Myat Min Khant, the Yangon district chair of the All Burma Federation of Student Unions (ABFSU), said the incident occurred at around 11am on Thu Mingalar Street in South Okkalapa Township.

“Normally, people just run off on their own when they disperse after a protest, but they stayed together as a small group, which is what raised the military’s suspicions,” he said.

According to Myat Min Khant, four of the injured protesters were boys, and one was a girl. Further information about their identities was not available at the time of reporting.

After running into the teens with their Toyota Mark II, the soldiers beat them with the butts of their rifles, he added.

“We still don’t know how bad their injuries are as they were taken away right after they were hit,” he said. However, they were believed to have suffered serious abrasions to their heads, backs, arms and legs, according to the ABFSU.

“I have been told that they are being held at the South Okkalapa Police Station,” the ABFSU district chair added.

Around 30 people took part in Monday’s protest march, which began at the Zarli Taung housing complex on Thu Mingalar Street and ended at the intersection with Yadanar Road.

Three other protesters, all aged 15 or 16, were also pursued by the regime’s forces but managed to escape, according to the ABFSU.

A similar incident occurred last December, when soldiers drove into a crowd of protesters in Yangon’s Kyimyindaing Township, killing several people and injuring a number of others.

On April 20, junta troops riding in a double cab pickup truck smashed into a car carrying three women who had taken part in an anti-regime demonstration in South Okkalapa.

Despite facing such brutal tactics from the military, Myat Min Khan said that protests would continue, albeit in a different form.

“It would be too much for us if we kept running into these situation, so we will continue to protest in other ways,”he said.