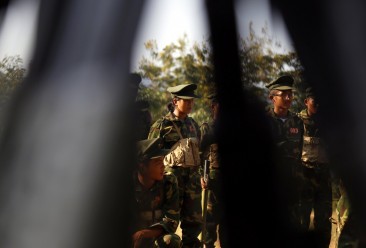 A series of battles between the Kachin Independence Army (KIA) and the Myanmar military broke out over the weekend in Kachin State’s Hpakant Township, locals said.

The KIA reportedly intercepted a junta column around one mile outside the village of Sezin on Saturday, leading to a clash which left the Myanmar army troops surrounded. The next day, two military jets launched multiple air attacks on the area in order to create an escape route for the trapped soldiers, a Sezin resident said.

“They launched five airstrikes this morning. Jets were hovering over the Met Lin stream,” the local man told Myanmar Now on Sunday, referring to the site outside of the village where the fighting took place.

At the time of reporting, it was unclear whether the junta soldiers had withdrawn.

Locals also claimed that the military column in question had suffered multiple casualties. Myanmar Now was unable to independently verify those reports, or to reach KIA information officer Col Naw Bu for comment.

Local sources alleged that forces belonging to the Shanni Nationalities Army (SNA) were seen fighting alongside the military against the KIA in the Sezin area at around 1pm on Monday, and that they had exchanged heavy artillery fire with the Kachin troops.

SNA spokesperson Col Sai Aung Mein rejected the accusation that they had fought on the side of the Myanmar army but confirmed that they had engaged in a recent confrontation with the KIA.

“There was, in fact, a clash with the KIA when they trespassed into our territory the other day but we are still looking into that matter,” he told Myanmar Now.

Locals said that tension was high in the area, and that SNA troops had carried out searches in Sezin in late June.

At the time of reporting, residents of the village were sheltering in churches in monasteries in the area, fearing further clashes.

KIA information page Kachin Net reported that on Saturday the organisation’s forces also clashed with a junta column from Infantry Battalion 42 near Kyauk Pone village, in the KIA’s Brigade 9 territory.

Other serious battles broke out between the KIA and junta forces in Waingmaw Township on July 11 and in Tanai on July 13.

Sezin is home to a military base which, in March of last year, was the site of the KIA’s first attack against the junta following the February 2021 coup.

The KIA is one of several ethnic armed organisations in Myanmar that have condemned the coup which ousted the country’s elected civilian government.

A relative of one of the women reported that they were all believed to be in good health, but added that contact with them has been extremely limited due to security measures.

“It hasn’t been easy to visit them in prison. When we go, we are subjected to thorough searches at military checkpoints. Right now, we can’t go at all,” said the family member, who did not want to be identified.

According to a statement released by the National Unity Consultative Council (NUCC)—an anti-regime coalition group—on Sunday, more than 3,400 women have been arrested by the military since it seized power in February 2021.

Regime authorities have also killed at least 300 women since the coup, the NUCC statement added.

The latest figures compiled by the Assistance Association for Political Prisoners (AAPP) show that a total of 16,432 people have been arrested for resisting the regime, of whom 12,973 were still in detention as of November 25.

Of the nearly 5,800 prisoners released by the junta on November 17 as part of an amnesty to mark Myanmar’s National Day, only 53 were political prisoners, according to the AAPP.

A second day of fighting triggered by military raids on Lay Kay Kaw kills five junta soldiers and forces thousands of locals to flee, some into Thailand

A second day of fighting triggered by military raids on Lay Kay Kaw kills five junta soldiers and forces thousands of locals to flee, some into Thailand