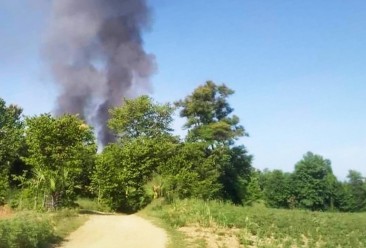 A five-year-old girl was killed on Wednesday when regime troops shelled her village in Magway Region’s Pauk Township, according to local sources.

The incident occurred when a military column of around 70 junta soldiers raided the village of Kyar Pyit Kan at around 7am, residents told Myanmar Now.

“They came across the Yaw River, which is west of here. Before they entered the village, they opened fire with heavy artillery, hitting and killing the child,” said one villager.

Other members of the family were also injured, he added.

“The entire family was hit. An artillery shell fell right on their breakfast table,” he said, speaking on condition of anonymity.

According to the villager, attempts to save the girl failed because the soldiers continued to pound the village relentlessly, forcing its inhabitants to flee.

After taking control of the village, the soldiers remained there until the following day, when they started setting fires before leaving.

“Half of Kyar Pyit Kan is gone now. We tried to go back to put out the fires, but we had to run away when they started firing heavy artillery at us again,” said the local.

Kyar Pyi Kan is a village of around 500 households. According to the villager, most of the southern part of the village has now been destroyed.

A local defence force called the Young Revolution Front said that  the group clashed with the junta troops as residents and resistance fighters attempted to extinguish the fires.