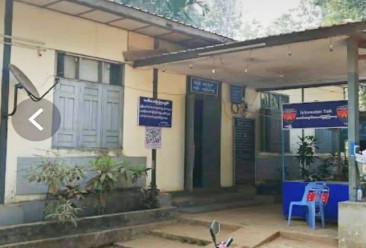 The immigration office in the Mon State town of Ye, in an undated photo taken prior to the August 3 attack (Supplied)

An urban guerrilla group based in the southern Mon State town of Ye said it killed five immigration officials in an attack there on Wednesday.

The victims included a junta-appointed staff officer, his deputy, and three other employees of the town’s immigration office, according to the leader of the group that carried out the attack.

The staff officer died instantly when the group, which calls itself Ye Balu (“Ye Ogre”), opened fire at the office at around noon, its leader said.

“He died at the scene. His deputy died on the way [to the hospital],” Kyat Mel (“Black Chicken”), the guerrilla group leader, told Myanmar Now.

He added that the group avoided harming members of the people who were in the office applying for national identification cards at the time of the incident.

The office, which is located a short distance from the town’s police station, was not under armed guard, he said.

According to a local resident, gunshots were heard coming from the police station shortly after the attack. Armed troops were also seen conducting searches of the area on Wednesday afternoon, sources said.

Kyat Mel said the attack was carried out because junta-appointed officials in the town had ignored calls made by resistance forces in July to resign by a deadline set for Tuesday.

“We issued the warning for both civil and armed employees. We carried out the shooting because they help to operate the military council’s administrative mechanism,” he said.

The regime has not released any information regarding the incident.

In the wake of last year’s coup, many government employees joined a mass civic boycott, known as the Civil Disobedience Movement, to protest the return of military rule. Since then, resistance groups have stepped up their pressure on those who continue to work for the junta.

There are a number of anti-regime groups operating in Ye, including the Mon State Revolutionary Union, a Ye Balu ally. The Karen National Union, which has collaborated with the resistance in its fight against the junta, is also active in the area.

In late June, Ye Balu shot and killed five members of the military-backed Pyu Saw Htee militia at a roadside checkpoint in Ye.