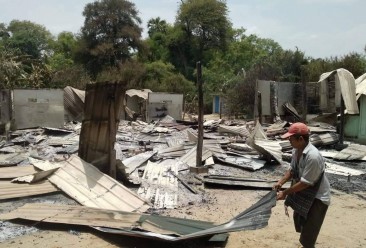 Many of the homes torched by regime forces in a village in Sagaing Region’s Depayin Township on Sunday belonged to military supporters, according to residents.

Of the 53 houses destroyed in the village of Na Gar Twin in the day-long attack, six were owned by known backers of Myanmar’s junta, residents said.

“They torched houses at random, without regard for whether they belonged to revolutionaries or army supporters or those sitting on the fence,” one local told Myanmar Now.

The source, who did not want to be identified, also said that there were no casualties in the attack, as residents had been warned by resistance forces early that morning of the approach of around 50 soldiers from a police station in Depayin.

Another resident said that the troops began firing on the eastern part of the village with light and heavy weapons at around 8am. They then entered the village and started setting fires, he added.

“They were there, torching houses the whole day. They didn’t leave until 9 or 10pm. We could see the smoke and hear the gunfire,” he said, adding that the scene was clearly visible from Oh Htein Kwin, the village about 5km away that most residents had fled to.

A member of a local defence force confirmed that houses belonging to army supporters were among those destroyed in the attack.

He added that resistance fighters fired hand-made mortars at the soldiers as they rampaged through the village, but were unable to force them to leave.

“They were essentially just bullying the civilians. We couldn’t do anything significant as we couldn’t enter the village with the manpower we have now,” he said.

One member of the anti-regime group was injured when the junta soldiers returned fire, he added. There were no confirmed regime casualties.

Residents returned to the village the next day to find that 53 of its roughly 300 homes had been burned to the ground.

The military has been targeting villages in many parts of Sagaing Region since last year’s coup triggered an armed resistance movement in areas that had previously been free of conflict.