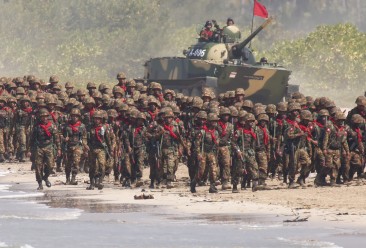 A military exercise in the Ayeyarwady region in 2018 (EPA)

The junta has sent an estimated 500 soldiers towards Demoso Township in recent weeks from military bases in southern Shan State and the Karenni (Kayah) State capital of Loikaw, members of local resistance groups said.

The column from Moebye set up stations in villages north of Demoso town, along the road which connects the two locations. At the time of reporting, junta posts had been seen in the communities of Nan Mei Khon, Thae Tsu Le, Pu Fa and Kone Thar, the KNDF’s spokesperson said.

He added that the reinforcement troops from Loikaw had been carrying out operations in Daw Poe Si and Sanpya 6 Mile villages in northeastern Demoso.

“They have launched assaults in the area in the past but this time they have more forces,” he told Myanmar Now.

Tanks and missiles were reportedly deployed to some of the junta bases in both Loikaw and Demoso.

Soldiers based eight miles southwest of the township in Hpruso have also occupied the village of Soe Hlyar Ku, which is located on the road to Demoso.

A recent KNDF statement detailed how clashes broke out with the junta forces around So Hlyar Ku between August 9 and 13.

“We are assuming that they’re trying to seize full control of the area by collaboratively sending reinforcements and supplies between their bases in different townships so that they can launch massive assaults,” the group’s spokesperson said.

The military’s Light Infantry Battalion 427 is already based in Demoso’s administrative centre.

Junta troops had also built large bunkers in several locations throughout the township, including at the central police station, a spokesperson for the Demoso PDF told Myanmar Now.

“It appears that they want complete control over the whole of Demoso Township,” a spokesperson for the Demoso PDF said. “We can see that they have done a lot in preparation for this.”

He added that even as the military has escalated its presence in the region, resistance forces continue to be reliant on guerrilla warfare tactics to ambush the junta forces.

Since the February 2021 coup, there have been a total of 420 clashes in Karenni State between the Myanmar army and resistance groups, according to a Wednesday statement by the Progresive Karenni People’s Force.