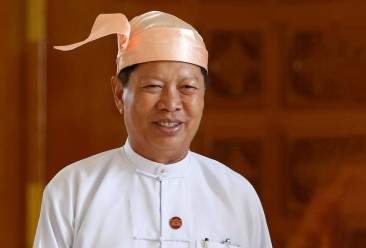 A source close to the 74-year-old, who was sentenced in March to 12 years in prison for alleged corruption, said the treatment was for diabetes and a worsening rash.

While he also requires ongoing medical attention for other conditions, including anemia and enlargement of the heart, he usually receives it at the prison hospital, the source said.

A former army general, Aung Ko served as religious affairs minister under the elected National League for Democracy (NLD) government that was forced from power by a military coup in February of last year.

Arrested on the day of the takeover, he later became the first NLD cabinet member to be formally charged with corruption as part of the newly installed regime’s push to neutralise its rivals.

Despite his military background and his previous position as a central executive committee member of the Union Solidarity and Development Party, the army’s political proxy, Aung Ko angered his fellow generals by backing the NLD’s calls for amendments to Myanmar’s military-drafted 2008 Constitution.

He is also hated by many in the military for abolishing Ma Ba Tha, an ultranationalist group led by rogue monk Wirathu, who was arrested in November 2020 during Aung Ko’s tenure as minister for religious affairs.

On March 14, the same day that he was sentenced to 12 years in prison after being found guilty on multiple charges of corruption, his sentence was reduced by half.

It was also around this time that his family was informed that he was suffering from severe anemia and had required four blood transfusions. They were also told at the time that he wouldn’t be allowed to receive treatment outside of the prison.

Companies owned by the adult children of two of Myanmar’s top generals have been granted numerous government tenders since last year’s military coup, according to documents seen by Myanmar Now.

In a sign that the regime that is now waging war on the country’s civilian population intends to continue the military’s long-standing practice of profiting from its rule, the documents show that companies linked to Lt-Gen Aung Lin Dwe and Lt-Gen Moe Myint Tun—both members of the junta that seized power in February 2021—have been awarded a number of lucrative contracts over the past year

According to documents and information received from an inside source, businesses run by members of Aung Lin Dwe’s family have been granted tenders to run several construction projects, including in the junta’s administrative capital Naypyitaw, while companies with ties to Moe Myint Tun have been awarded at least nine projects—among them, one for repairing cables inside the Naypyitaw Union Territory.

“Those two are the biggest ones. Their companies won many tenders at the price of their own choosing,” said the source, who did not want to be named.

According to the records of the Directorate of Investment and Company Administration, Moe Myint Tun’s three adult children—Moe Htet Htet Tun, Khaing Moe Myint, and Yadanar Moe Myint—serve as directors of three companies that were registered at the same Naypyitaw address in the months leading up to the overthrow of Myanmar’s elected civilian government.

Between them, these three companies—Yadanar Moe Htet Aung, Phyo Pyae Pyae, and Pin Gangaw—won multiple tenders from two ministries between October of last year and March of this year, documents received by Myanmar Now showed.

The Ministry of Border Affairs awarded one contract during this period for a project in the Pa-O region, with three more granted for the current fiscal year. The Department of Prisons, which is under the Ministry of Home Affairs, awarded another three to the companies in the second half of last year.

According to Myanmar Now’s source, two army captains have been assigned the task of submitting tenders for the companies belonging to Moe Myat Tun’s children.

“It’s easy money for them. They aren’t doing projects that are difficult to carry out, like paving roads. They don’t have a big team working for them. It’s just the two army captains handling all the tender procedures,” said the source.

While monetary figures were not available for any of these projects, another one that was awarded for a cable-repair project in Naypyitaw’s Lewe Township was reportedly worth 500m kyat ($238,000).

At 54 years old, Moe Myint Tun is one of the youngest high-ranking generals in Myanmar’s armed forces. A former army chief of staff and head of the military’s Naypyitaw Regional Command, he is known to be close to junta chief Min Aung Hlaing.

He currently serves as chair of the regime’s Investment Commission and sits on the board of directors at Myanmar Economic Holdings Limited (MEHL), a military conglomerate.

Aung Lin Dwe, the secretary of the State Administration Council, as Myanmar’s junta calls itself, is a former judge advocate general who has been accused of ordering soldiers to destroy digital evidence of atrocities committed during the military’s “clearance operations” against the Rohingya in Rakhine State. He has also served as an MEHL director.

His three children—Shwe Yi Phoo Aung, Hlaing Bwar Aung, and Phyo Arkar Aung—have also profited from their father’s position. Between them, they own the Aung Myint Moh Lin and Mingalar Aung Myay construction companies and the Shwe Yee Phyo Pyae production company. All three have been blacklisted by the civilian National Unity Government (NUG), which has urged the public to boycott the companies.

According to Myanmar Now’s source, Aung Myint Moh Lin and Mingalar Aung Myay “take most of the road construction projects” in Naypyitaw. Mingalar Aung Myay has also been awarded many other big-budget projects by the military and the home affairs and border affairs ministries.

In addition to their construction companies, the family also owns a cement factory located on a four-acre plot of land near Naypyitaw, the source said.

As junta-appointed officials continue to scrutinise more than 200 companies that were awarded major contracts in Naypyitaw before the coup, Aung Lin Dwe’s children stand to win an even bigger share of the pie.

New bidding rules and background checks designed to weed out companies sympathetic to anti-regime forces are also expected to eliminate many other potential rivals, sources said.

Aung Lin Dwe, who at the time was Judge Advocate General, fabricated cover stories and ordered soldiers to delete files from their phones, according to a defector

Even in areas that have seen relatively little resistance to the coup, such as Shan State, opportunities to compete for government contracts are drying up.

“It’s strange that local businesses can no longer win government tenders. Only companies that are either junta-owned or junta-affiliated can win them,” said the owner of a trading company based in Muse, a town on Myanmar’s border with China.

While the military’s oversized role in the economy has long been a fact of life in Myanmar, many in the country’s business community say that it is harder now than ever to get ahead without ties to top generals.

The biggest winners these days, apart from those related to members of the military council, are ministry officials loyal to the regime, according to some observers.

“Those people are the ‘brothers’ of the army generals. If you work for one of the ministries, you are practically a member of the military. They are all a part of the same ecosystem,” said a source close to the junta.

The NUG says that one of the chief reasons the military decided to seize power again last year was that it wanted to regain total control over the economy after a decade of relative openness.

Under successive regimes that ruled Myanmar for nearly half a century, the military’s top brass grew enormously wealthy, even as the country descended into ever-deepening poverty. And now history is repeating itself, according to Kyaw Zaw, the spokesperson of the NUG’s president’s office.

“The army generals and their families are growing richer as ordinary citizens starve. They’re basically robbing the country’s people,” he said.