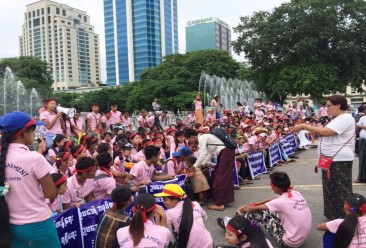 Honeys Holdings, a Japanese clothing retailer that produces much of its product line in Myanmar, has decided that cheap labour costs outweigh the risks of doing business in a country in turmoil.

Earlier this month, the company revealed that it was planning to spend more than $11m over the next two years building a third factory in Yangon’s Mingaladon Industrial Park, bucking the trend of foreign businesses leaving since last year’s coup.

While the move comes as somewhat of a surprise given Myanmar’s current instability, it is in keeping with the company’s reputation for reliance on workers with few if any rights, say those who are familiar with its business practices.

Myo Myo Aye, the chair of the Solidarity Trade Union of Myanmar (STUM), said that her dealings with the company began in 2017, when it fired a number of labour leaders during a dispute over workers’ demands for more time off during the Thingyan holidays.

“The workers were asking for their rights and they fired them right away. It’s against the rules to do that, but they did it anyway,” she said.

According to Myo Myo Aye, the company didn’t just ignore workers’ demands to reinstate those it had dismissed; it also imposed higher production targets on them.

The workers were warned that if they failed to meet the new quota—which was increased from 500 to 750 pieces per day—more than four times, they would also be fired.

Over the next month, around 400 people lost their jobs.

This led to a six-day strike outside of the factory, from June 18 to 23, and a protest in front of City Hall on June 24. Finally, the government’s Dispute Settlement Arbitration Council agreed to examine the case, but in the end decided in favour of the company, said Myo Myo Aye.

To make matters worse, the company also took legal action against Myo Myo Aye, accusing her of criminal defamation. This case was finally dropped late last year after company representatives failed to appear in court during a hearing that took place just weeks after her release from Insein Prison, where she had been held for six months following her arrest shortly after the military seized power.

“If the state continues to allow such a company to operate in Myanmar, it will only get worse from now on,” said Myo Myo Aye.