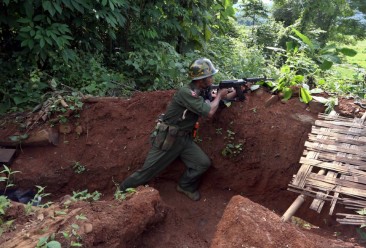 Locals have accused the Myanmar army and the Shanni Nationalities Army (SNA) of carrying out an arson attack on a village in Kachin State’s Hpakant Township on Wednesday morning, resulting in the destruction of hundreds of homes and the death of several civilians.

One day earlier, the Kachin Independence Army (KIA) had attacked the police station in the village in question—Sezin, some 50km southwest of the town of Hpakant—but military airstrikes prevented the ethnic armed organisation from capturing the post.

The burning followed a day-long battle on Tuesday in which Myanmar military troops who had been airlifted to the site fought alongside the SNA against the KIA, firing heavy artillery and dropping bombs which destroyed two homes.

At least eight air attacks were launched during the episode of fighting, locals told Myanmar Now.

The junta and SNA forces allegedly started torching homes in Wards 4 and 5 in Sezin at 1am, around five hours after the KIA was forced to withdraw.

“The last time that they came here, they threatened to burn the village down. We had been worried about it ever since,” a 40-year-old Sezin resident said.

Another man from Sezin explained that the first houses targeted were located near the village’s police station and the monastery.

“Nothing much is left in the village as they carried out the attack in three separate places. We couldn’t go and put out the fire either, since they would shoot us,” he said, describing how SNA troops fired shots at civilians attempting to extinguish the blaze after the KIA had withdrawn.

Locals speculated that between 200 and 400 of Sezin’s 700 households were destroyed.

By 4am on Wednesday, the majority of the village’s residents escaped to the villages of Hawng Par and Tar Ma Khan, 20 miles away, the second man from Sezin said.

At least nine villagers are believed to have been shot and killed as they fled.

“A couple and their child were planning to leave at around 6am and they were all shot dead,” the local man claimed.

Myanmar Now was unable to independently verify the number of civilian casualties in the attack.

Some 200 residents who were unable to leave are said to be trapped inside the Sasannapala monastery, located near the village’s police station, and held hostage by the occupying troops at the time of reporting.

“We were told that the military was not allowing them to leave the monastery compound. Even the monks can’t leave,” a 50-year-old woman from Sezin said, claiming that she had heard that at least one person, a girl, had been shot for trying to leave.

When contacted by Myanmar Now to comment on the allegations of arson and murder in the Hpakant Township village, SNA spokesperson Col Sai Aung Mein claimed that members of the KIA and the anti-junta People’s Defence Force (PDF)—who often fight alongside the Kachin army—were the ones who had torched the homes.

“Most of the people we asked told us that it was the PDF and KIA that torched the village. I heard they’d set up a station inside the police station and that they were still firing shots,” he told Myanmar Now.

Col Sai Aung Mein added that SNA troops were still stationed at a small base near Hpakant’s border with Homalin Township in Sagaing Region, and had not engaged in any battles with the KIA since Monday.

Locals previously accused the SNA of carrying out searches in Sezin on two days in late June, and said that tension had risen in the area after the KIA set up a post in the southern part of the village on June 30.

The Kachin forces surrounded and attacked a junta column that had been carrying out assaults near Sezin on July 16. Serious battles took place over the next three days, with the military launching multiple airstrikes in an attempt to create an escape route for a trapped unit of soldiers.

After regrouping, the junta forces set up a post on a hill in eastern Sezin. The KIA attacked the station, as well as an SNA checkpoint, on Monday, overrunning both locations.