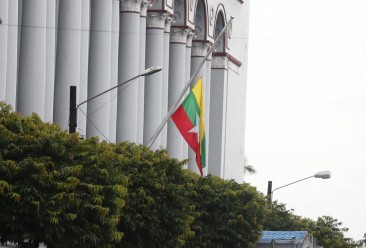 The junta-controlled Central Bank of Myanmar (CBM) instructed local banks on Thursday afternoon to buy the remaining US dollar balances held in the foreign currency accounts of businesses, organisations and individuals by 6pm that day.

The instruction is part of an ongoing effort by the CBM to restrict the retention of foreign currency as part of the military’s desperate attempts to gain control over the domestic flow of international monies.

The latest order will affect nearly all businesses registered at the Directorate of Investment and Companies Administration (DICA), including local companies with up to 35 percent foreign ownership, a source familiar with the matter told Myanmar Now.

The individual said that financial institutions were still clarifying the scope of the order with the CBM at the time of reporting.

An exception was reportedly made for Foreign Direct Investments (FDIs) run with the permission of Myanmar Investment Commission and those entities operating in Special Economic Zones (SEZs). Both were spared from a mandatory currency conversion policy launched by the central bank in April.

At that time, the CBM ordered financial institutions with authorised dealers’ licenses to convert US dollar transfers within one business day of receipt into local currency at a fixed exchange rate of 1,850 kyat per dollar.

Following criticism from embassies and international chambers of commerce, the CBM backtracked the directive on April 17 and exempted several types of businesses and organisations from compliance, including the FDIs, SEZ companies, as well as foreign diplomats and staff members of the UN and other recognised international development agencies. In another June order that was revoked a month later, the CBM also issued an exemption for companies that had at least 10 percent foreign ownership.

In mid-July the central bank again ordered companies with a foreign ownership stake of up to 35 percent to exchange their international currency to kyat in banks by 6pm of July 18.

Two days before that order was issued, the CBM called on local companies and banks to suspend and reschedule the repayment of foreign loans.

Due to the junta’s mandatory currency conversion policy and its shifting orders, the dollar value had risen to more than 2,000 kyat in Myanmar’s black market at the time of reporting, and the prices of fuel and imported goods had increased in recent months.

Given the junta’s unpredictable policies, the earlier source remarked that the CBM could likely impose new currency conversion requirements on the FDIs and SEZ companies currently spared from the directives.

In a new economic monitor report released on Thursday, the World Bank said the junta’s recent policy shifts are likely to have lasting effects on the country’s growth and economic stability.

“Trade and foreign exchange restrictions have unwound previous reforms to liberalize trade and unify the exchange rate,” the report said in the press release.

“Lessons from Myanmar’s economic history suggest that to the extent that these trends continue, investor confidence and the business environment will weaken further, constraining Myanmar’s growth potential over the longer-term.”