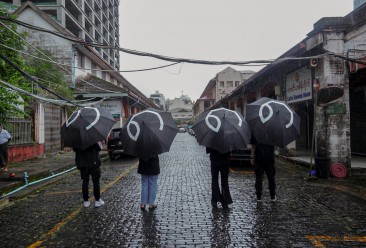 Junta personnel were targeted in fatal attacks in Yangon over the weekend and on Monday as the country marked the 34th anniversary of the 1988 pro-democracy movement, local sources said.

A former administrator for Aung San Ward in Insein Township was shot along with his wife by two armed and unidentified assailants as they walked through their neighbourhood at 8pm on Saturday.

The gunmen arrived on a motorcycle and gunned down the couple, injuring 45-year-old Tin Maung Naing with a bullet to the thigh. His wife, Thi Thi Naing, died of a gunshot wound to the head, according to a police source who spoke to Myanmar Now on the condition of anonymity.

He said that five 9mm pistol shells were found at the scene of the shooting, for which no group had claimed responsibility at the time of reporting.

Explosions occurred in two Yangon townships the following night and on Monday morning, according to the police source and residents of the respective areas.

The first bomb went off at 9:40pm on Sunday night at the junta’s local administration office in North Okkalapa Township’s Ward E. The township’s anti-coup People’s Defence Force announced that it had detonated the remote-controlled device in collaboration with another allied urban guerrilla group.

The extent of the damage caused by the blast was not known at the time of reporting.

Two military vehicles were also reportedly targeted in a bombing near Yadanar Road in Thaketa Township at around 8am on Monday morning.

“I heard a loud noise and asked around about what happened. People in the neighbourhood said that some individuals tossed bombs into two military vehicles that were travelling on the road,” an area resident told Myanmar Now, adding that an ambulance arrived shortly after the incident.

Around one hour later, another bomb reportedly went off at an old petrol station on the same road, he said. An unexploded device was detonated in a controlled explosion by junta troops, and soldiers were seen stopping and searching passing pedestrians and buses in the area.

Three men arrived at his office claiming they wanted to register guests staying at their residence, as the junta requires. Kyaw Min Han refused to allow them entry, and the men shot him in the chest, the police source said.

Wi Moutti, an urban guerrilla force active in the area, claimed responsibility for the attack and told Myanmar Now that Kyaw Min Han and one other individual were both injured.

A member of Wi Moutti said that the staff in Kyaw Min Hans’s office had been involved in the arrest of several young protesters in recent months, but Myanmar Now was unable to independently verify her claim.

The military council deployed troops across Yangon on Monday, more than three decades after massive demonstrations broke out across the country as the public demanded an end to decades of military rule. Amid tightened security measures, activists in the city paid tribute to the pro-democracy movement—remembered annually on August 8, 1988, or 8-8-88—by carrying black umbrellas on which the number eight was printed in white Burmese script.

More than one year after the Febuary 2021 coup, resistance forces in urban centres continue to carry out targeted attacks on ward administrators, soldiers, and alleged military informants in an attempt to destroy the pillars of the junta’s claim to power.

Army chief Min Aung Hlaing said in an August 1 speech that since the coup, there had been more than 2,000 such assaults on military infrastructure and personnel reported in Yangon alone.