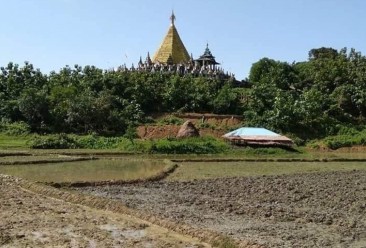 Locals have objected to the junta occupation of religious buildings in Rakhine State, as Myanmar army reinforcements arrive and set up posts in monasteries and mosques in the northern townships of Buthidaung, Kyauktaw, Mrauk-U and Minbya.

In Buthidaung alone, soldiers have reportedly been staying in monasteries in at least four villages, and at the historic 31 Realms pagoda, as well as mosques in three communities.

“They are doing whatever they want. These are public places that they should stay away from. They are deliberately doing this to instill fear in the public,” a former Rakhine State parliamentarian from Buthidaung told Myanmar Now.

According to a resident of the 1,000-household Kyein Chaung village, at the time of reporting, Myanmar army troops had stationed themselves near the compound of a local mosque for more than two weeks.

“They are taking cover behind the walls of the mosque compound,” the local man said. “Although they haven’t been bothering us, we’re still scared to go inside the mosque now that they’re there.”

Other armed groups, including the Arakan Army (AA), are active in the Kyein Chaung area, which is located five miles from Buthidaung’s administrative centre. The man explained that villagers are afraid that the mosque and nearby homes would be destroyed if fighting were to break out.

An abbot from Mrauk-U said that pagodas on two hills in the township—Shwe Taung and Thin Kyate Taung—were also occupied by Myanmar army troops, and that he had avoided visiting the sites due to the military’s presence.

“We don’t want them to make their bases in villages or religious buildings,” he said.

Junta forces are also reportedly positioned at the Mahamuni pagoda in Kyauktaw, on the road connecting Mrauk-U with the state capital of Sittwe, and that gunfire has been heard coming from the site.

“They’re staying in the pagoda compound and are firing gunshots. It’s such an inappropriate thing to do. As a Buddhist, I condemn such actions,” a local from Kyauktaw said.

Soldiers have been stationed at the Kyein Taung pagoda in Minbya since before the mid-April Thingyan festival. Locals said that they have only been allowed to pray at the site with military permission.

“To be completely honest, I don’t like the fact that the military is setting up bases in the buildings of any religion,” a Minbya resident told Myanmar Now.

Tensions have been growing in Rakhine State since last November, when the AA and the military clashed for the first time in a year. Battles also occurred in the state’s northern townships last December, as well as in February of this year.

Junta bases around the town of Ann—where the Myanmar military’s Western Regional Command is based—as well as in Buthidaung and Mrauk-U townships, were heard firing both heavy and light weapons last week, raising concern among locals of renewed fighting.

On May 15, the AA urged the Rakhine public to avoid areas where junta personnel are active, warning that fighting could break out at any time. Days later, a military spokesperson claimed in a press conference that the Myanmar army was “holding back” in the region in order to prevent unrest.

The military also issued a curfew in southern Chin State’s Paletwa Township, across the border from Rakhine, where a clash broke out with the AA on May 26.