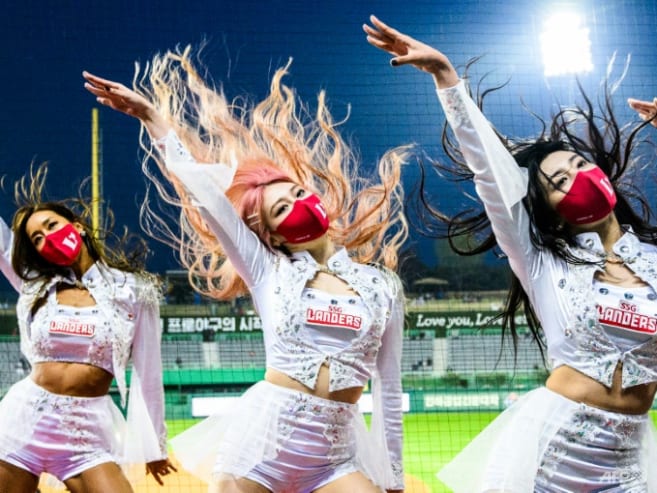 In baseball-mad South Korea teams of professional cheerleaders pumping up players and fans with elaborate K-pop routines are as integral to the games as beer and fried chicken.

Imported by American missionaries more than 100 years ago, baseball is South Korea’s most cherished spectator sport, beating out even football.

There are no cheerleaders in Major League Baseball in the United States, but they are central to the spectacle in South Korea as they relentlessly dance, cheer and lead the fan chanting throughout entire games.

Even when stadiums were devoid of supporters during the height of the pandemic, the players requested that the cheerleading teams continue to perform every innings, saying it was too depressing without them.

“We usually performed facing the players not the empty seats so we were really able to watch the game and cheer in earnest,” 21-year-old Mok Na-gyeong, a cheerleader with the number-one ranked SSG team, told AFP.

“We receive thank-you messages from players saying they got an extra dose of energy from us,” she said, adding that players sometimes request tweaks to their “introduction songs”.

Every baseball player in South Korea’s KBO League has a song written for them by their team. When they step up to the batter’s box, their music is blasted out into stadiums and the cheerleaders start dancing.

“FLOWERS OF THE GAME”

Bae Soo-hyun, 37, is South Korea’s longest-serving cheerleader and has been performing at SSG Landers Field in Incheon for nearly two decades.

The public perception of cheerleaders has changed, she said, from women in short skirts who dance to professionals who act as a “bridge” between players and fans.

Usually, between four and six SSG cheerleaders perform on a stage in front of one section of the stand.

Their uniform includes a white crop-top with lace over it and silver epaulets, plus wedge trainers to give them extra height.

For Bae and her colleagues it is a full-time job.

“Without us there wouldn’t be coordinated cheering for the players,” she said, describing how she and her team lead fans through dance routines and chants for specific players.

“Our cheerleading helps players focus more at bat and on the mound. We unite the fans.”

South Koreans are so accustomed to cheerleaders running through their routines with every twist and turn of the game that to watch baseball without them is unthinkable, she said.

“We are the flowers of the game… it would be far less entertaining if we weren’t there!”

South Korea has a strong culture of fandom.

The fans of K-pop sensations BTS are known as ARMY, for example, and their collective power has been brought to bear on everything from disrupting Trump rallies to fundraising for Ukraine.

South Korean baseball fans have a “strong sense of loyalty to their teams, they see us cheerleaders as practically family members too”, she said.

In a bid to distract South Korean civilians from politics, he then eased tight controls on popular culture in what would become known as the “3s policy” of promoting sports, sex and screen.

“While there was a political ulterior motive behind the launch, it has turned out to be South Korea’s most popular sport league over the past 40 years.”

Initially the military regime used “an element of coercion” to force companies to sponsor teams and support the new leagues.

“But in hindsight it laid down the groundwork for baseball to become a sizeable sports industry.”

Professional teams created their own cheer squads in the 1980s and began using them as an “active audience marketing strategy”, according to the Korea Cheerleading Association.

The strategy worked, and now for many fans, the synchronised cheering in the crowd is as important as the action on the field.

Park Han-eol, 23, who was watching at SSG stadium while waving a Korean flag, said that the cheerleaders bring “positive energy to the ballpark”.

The games would feel “empty” without them, Park added.