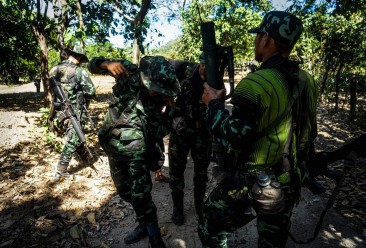 KNU spokesperson Padoh Saw Taw Nee told Myanmar Now that the BGF soldiers were operating south of Myawaddy’s administrative centre and near the town of Lay Kay Kaw, and that their exact numbers were unconfirmed.

“We are taking great caution in handling this. We are also going to practise the right to defend ourselves to the fullest,” he said.

Those soldiers may be among those now gathering in Myawaddy, according another source within the KNU recently told the organisation’s Mutraw News.

Karen State-based media outlet KIC reported that since May 20, the military had been sending reinforcements to the BGF post in Myawaddy’s Hpa Lu Gyi village. The movements were seen as preparation by the junta to regain control of another Myawaddy Township base, Thay Baw Boe, some 40km southeast of Lay Kay Kaw.

Thay Baw Boe has been held by Brigade 6 of the KNLA since they seized it from the military on May 18 accompanied by the allied Cobra Column guerrilla force.

Five junta soldiers, including the base’s deputy commander, were killed in the joint attack on the site.

A Cobra Column information officer speculated that the Myanmar army had opted to send BGF troops, who have better geographic knowledge of the area, to try to seize Thay Baw Boe on their behalf.

“It is already expected that they will try to reclaim control of the base,” he said.

The BGF had been seen operating around the villages of Mei Htaw Tha Lay, Htee Mei Wah Khee and Hpa Lu Gyi in the Lay Kay Kaw area, he said.

Tensions have been high in Myawaddy Township since March 7, when the KNU ordered junta forces to leave the town of Lay Kay Kaw within three days so that civilians could return to the area after being displaced by an earlier military offensive last December.

Since then, fighting has broken out in the township almost daily.