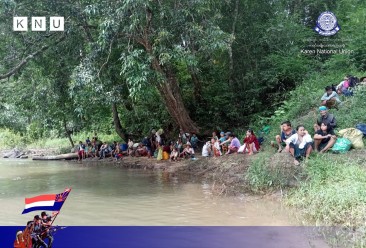 Recent military operations in Mon State and Bago Region have displaced more than 150,000 people, according to a statement released by the Karen National Union (KNU) on Sunday.

Heavy shelling by regime forces in Mon State’s Thaton District and Bago Region’s Nyaunglebin Township, which are under the control of KNU brigades 1 and 3, respectively, has forced a total of 154,866 civilians in these areas to flee their homes, the statement claimed.

If correct, these numbers represent a dramatic escalation of the humanitarian crisis in eastern Myanmar and other parts of the country that have seen strong resistance to last year’s coup.

According to figures released by the UN Office for the Coordination of Humanitarian Affairs (OCHA) on July 31, the military takeover and its aftermath have produced more than 866,000 internally displaced persons (IDPs) nationwide.

Combined with the number of people displaced by pre-coup conflicts, this brings the current number of IDPs in the country to more than 1.2m, according to OCHA’s estimates.

In its statement, the KNU said that there were also large numbers of IDPs in its territory in Karen (Kayin) State, especially in Mutraw (Hpapun) District and Myawaddy Township.

However, exact figures were not available, it added.

According to the Karen Human Rights Group (KHRG), the military has also been obstructing efforts to assist IDPs by preventing groups and individuals from transporting supplies to people in need.

“It’s a huge human rights violation to prevent civilians from receiving humanitarian aid. So many of the IDPs’ basic rights are being violated and they have no security at all,” said KHRG spokesperson Saw Nandar Htoo.

Local humanitarian aid organisations say that basic necessities such as food and shelter are in short supply.

It was unclear how many civilian casualties there have been from the junta’s indiscriminate shelling, but last Wednesday, there was one confirmed death in Htoe Wah Sike, a village in Nyaunglebin Township.

The victim, a 52-year-old woman named San Oo, suffered multiple injuries after a shell landed on her home, sources said. She died at the hospital later the same day.

The regime has also carried out numerous airstrikes against the KNU and its allies in the area, resulting in civilian deaths and mass displacement, local sources have reported.