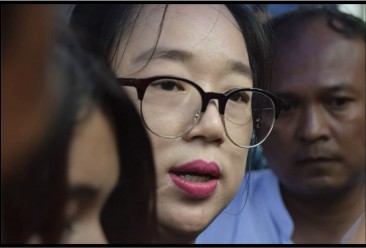 A lawyer who was charged last month under Myanmar’s anti-terror law for allegedly financing an armed resistance group was transferred to Mandalay’s Obo Prison on Thursday.

Ywet Nu Aung, a prominent lawyer who has represented a number of high-profile clients, had been held at the Mandalay Palace interrogation centre since her arrest on April 27.

Despite that facility’s reputation for mistreatment of prisoners, she appeared to be in good physical condition, a source close to the lawyer told Myanmar Now.

“She’s in good health, but she lost some weight,” said the source.

She was later charged under Section 50j of the Counter-Terrorism Law, which carries a maximum sentence of life in prison.

The charge stems from claims made by Myanmar’s regime that a treasurer for a Mandalay-based armed resistance group had confessed to receiving money from Ywet Nu Aung.

The source close to the lawyer said that she would conduct her own defence.

“She won’t be acquiring another lawyer. She said she would represent herself,” said the source.

She was also the lawyer for “Victoria,” a preschool student who was sexually assaulted in Naypyitaw in 2019, in a case that sparked national outrage.

Another client was Swe Win, the editor-in-chief of Myanmar Now, in a defamation case laid against him by Mandalay-based ultranationalists. Ywet Nu Aung faced threats from the same ultranationalists for her involvement in the case.

According to prison sources, a hearing was also held for Ywet Nu Aung on Thursday. Details were not available at the time of reporting.