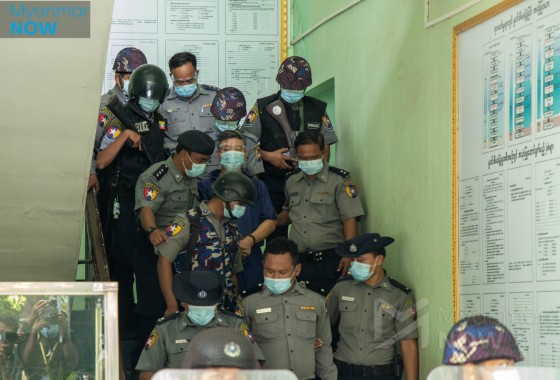 The leader of the United Democratic Party (UDP)—popularly known as the Hninsi, or Rose, Party—was sentenced to an additional six years’ imprisonment in Yangon on Tuesday.

Kyaw Myint, whose party was disbanded after he was arrested two years ago following revelations about his past prison escape, is currently being held in Yangon’s Insein Prison.

The new prison sentence and 100,000 kyat ($48) fine handed down by a court in Insein Township were related to money-laundering charges.

The UDP was dissolved less than a month before Myanmar’s November 2020 election for possession of millions of dollars in illegal funds from China.

Kyaw Myint was later charged with absconding from prison, as well as with offences under the Immigration Act and the Financial Institutions Law.

Until his arrest, he was living—and spending—freely as chair of the UDP, which fielded the second-largest number of candidates in the 2020 election after the ruling National League for Democracy (NLD).

Last year, he was ordered by a court in Mandalay to finish a nine-year prison sentence handed to him more than two decades earlier, plus serve two more years for breaking out of the city’s Obo Prison in 1999.

Kyaw Myint legal troubles came after Myanmar Now published a story about how he had returned to Myanmar in 2013 from Canada, where he had won political asylum and founded the UDP.

Some backers of Myanmar’s military junta have called on the regime to pardon Kyaw Myint, suggesting that he was the victim of political manipulation by the NLD.

The latest sentence against him indicates that his status since last year’s coup remains as uncertain as it was before.