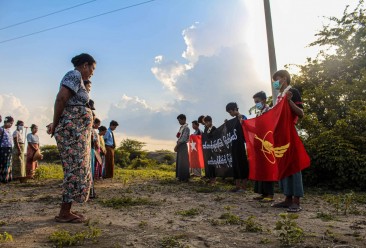 Residents of eight Sagaing Region townships—Kanbalu, Kani, Khin-U, Kyunhla, Monywa, Pale, Ye-U and Yinmabin—saw landline and mobile phone services disrupted on May 24, and feared that the move could precede a major military operation in the region.

The cuts were expanded this week to Salingyi and Taze in Sagaing, as well as Gangaw, Myaing, Pauk and Yesagyo townships in Magway, according to local sources.

The military has been raiding and burning villages in the affected townships, an officer in the Monywa chapter of the anti-junta People’s Defence Force (PDF) said, noting that he was only able to speak with Myanmar Now because he had relocated outside of the area affected by the cuts.

“You can still access the internet in some places in Salingyi, but they’re also torching some villages in the area that has had the communications cut off,” he explained. “We don’t know the number of casualties or the extent of the damage yet. However, we do know that they’re sending more reinforcements.”

Junta helicopters had been seen landing within the Northwestern Regional Command’s base in Monywa, he added, presumably bringing more soldiers to the area.

Some 130 trucks typically used to transport troops were also seen leaving the regional command base on May 27, the PDF officer said, speculating that a military offensive may be soon launched in the townships of Kani, Pale and Yinmabin.

“All of those trucks were covered in tarps, so we don’t know how many soldiers they were carrying,” the PDF officer told Myanmar Now.

Another local man in Monywa said that the convoy in question had arrived in Pale at the time of reporting.

Amid the shift in troop movements, he maintained that no phone or internet services were available on the western shore of the Chindwin River in Kani, Pale, Salingyi and Yinmabin townships, but that there had been occasional access from two telecommunications providers—Ooredoo and Telenor—in some other parts of Sagaing.

“You can still access the internet in some places in Monywa but calls never go through and even if they do, we aren’t able to hear the person on the other line,” he said, adding that telephone lines remained “quite unstable.”

He noted that none of the service providers had notified the public of the communication blackouts in advance.

Another convoy of 200 military trucks was seen by locals travelling along the Monywa-Pathein highway on Monday evening, reportedly assaulting villages and burning homes along the route.

Meanwhile, the junta forces’ presence around Salingyi has recently increased. The township is the site of the China-backed Letpadaung and S&K copper mines—projects that resistance forces have demanded be halted. The military has been assaulting villages near the mines, causing locals to flee; two displaced men were recently found murdered after being abducted by Myanmar army troops occupying the area.

On Monday evening, phone service was reportedly restored to parts of Salingyi, as well as Pauk.

Myanmar Now remains unable to obtain comment from locals in most of the affected townships due to the communications blackout.

The junta has not released any statement addressing the cuts to phone and internet service in Sagaing and Magway.