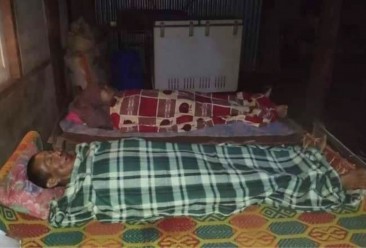 The body of Bant, a man who was killed by army shelling during his wife’s funeral, lies next to hers (Supplied)

A man died on Friday after a Myanmar army shell hit his home during his wife’s funeral, according to residents of his village in southern Shan State’s Pekhon Township.

The man, identified as 70-year-old Bant, was killed by shrapnel from the shell just hours after his wife’s death, a neighbour told Myanmar Now.

“His wife died of natural causes at around 4pm that day, and while they were holding a funeral for her, the army started shelling,” said the neighbour, who asked to remain anonymous.

“He was hit in the back and the shrapnel punctured his heart and lungs. Blood was gushing from his back, nose and mouth,” he added.

The incident occurred in Sin Phyu, a village located on the eastern shore of Pekhon Lake, late Friday evening, residents said. No other casualties were reported.

According to the neighbour, at least 20 shells were fired from the town of Pekhon, on the opposite side of the lake, where Military Operation Command No. 7 is based.

“They’ve fired on us in the past, but the shells always landed just outside of the village. This was the first time we had a direct hit,” he said.

A house in the centre of the village was also destroyed by the shelling on Friday, he added.

Thousands of people from at least half a dozen villages have fled the area east of the lake since May, when the military started carrying out an offensive there in the wake of an attack on an outpost in neighbouring Nyaungshwe Township.

Resistance forces killed at least 15 junta troops and captured five more when they overran the Hti Ri outpost on May 12. Less than a week later, the military destroyed the entire village of Saung Nang Khae, on the northeastern shore of Pekhon Lake.

According to a spokesperson for the Pekhon People’s Defence Force (PDF), dozens of houses have also been torched in deserted villages that are now occupied by regime forces.

In Sin Phyu, which is still partly inhabited, residents said that only farmers in the southern part of the village are able to continue working their fields due to fears of army shelling.

“They can still farm in the south, but in the north they’ve had to stop. Luckily, though, they still have some crops left over from the last harvest,” said one villager.

According to the Karenni Civil Society Network (KCSN), more than 200,000 people have been displaced in Karenni (Kayah) State and southern Shan State since the military seized power in February of last year.

The military has also killed a total of 261 civilians in predominantly ethnic Karenni areas since the conflict began, according to figures released by KCSN on August 3.