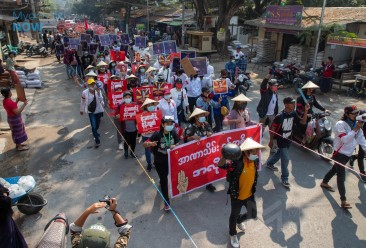 Regime forces shot and killed a third-year medical student in Sagaing Region’s Myinmu Township on Friday, according to a source close to the victim’s family.

Kyaw Nyi Zin, 21, died after junta troops opened fire on the vehicle that he and other members of his family were traveling in on their way from Mandalay to Monywa.

“They were going to a wedding in Monywa and the military told them to stop. But then they started shooting before they even had a chance to slow down. Kyaw Nyi Zin was shot in the head,” the source said.

After the incident, the family took Kyaw Nyi Zin to Monywa to receive emergency medical treatment, but he later died of his injuries, the source added.

Kyaw Nyi Zin was a student at the University of Medicine, Mandalay, one of five universities in Myanmar dedicated to the study of medicine.

Since last year, however, he had stopped attending classes at the state-run university in order to take part in the Civil Disobedience Movement (CDM) against military rule.

A funeral was held for him in Mandalay on Saturday.

“I’m getting used to the horror, but this still breaks my heart,” said a Mandalay-based doctor who spoke on condition of anonymity.

“They do as they please, just because they have weapons.”

Healthcare workers have been at the forefront of the anti-coup movement, making them frequent targets of arrest and regime brutality. An estimated 80% of the medical staff in Mandalay are currently taking part in the CDM.

Dr. Thiha Tin Tun, a Mandalay doctor, was among more than 100 people killed in crackdowns on anti-coup protests around the country on March 27 of last year.

The junta has revoked the licenses of medical professionals who refuse to work in hospitals under its control, and has also threatened to shut down private hospitals that hire doctors taking part in the CDM.

As a result of these moves, hundreds of doctors in Mandalay alone are believed to have lost their livelihood for resisting last year’s military takeover.