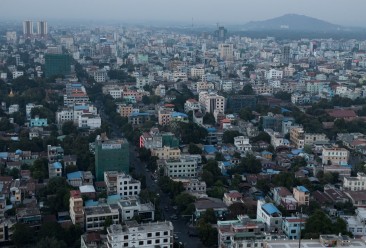 On February 20, 2021, three weeks after the military coup, employees of the Yadanarbon Port in Mandalay’s Maha Aungmyay Township went on strike in protest—one of a series of actions that would transform the area into a site of ongoing resistance.

As junta forces demanded that ships docked on the Ayeyarwady River restart operations, locals gathered and began demonstrating against the intervention.

“We went to protest at the port because they were forcing the employees to run the ships again. We didn’t know that they would respond in the way that they did,” said Lin, a man who took part in the protests.

He was referring to a brutal crackdown in which troops fired rubber bullets into the crowd of civilians before switching to live ammunition.

“We thought they were only using rubber bullets, so we fired back with our slingshots,” Lin told Myanmar Now. “Then a sniper shot Wai Yan Tun in the head. His entire head exploded right in front of us. We were in shock when we saw that happen.”

Soldiers from the 33rd Light Infantry Division, which was implicated in the Inn Din massacre, were spotted on Saturday.

The boy had worked in the local market on Kanna Road near the port, carrying heavy loads of goods for vendors.

“He didn’t have strong political opinions as he was only 16, but he knew right from wrong. He knew that the coup was unfair and unjust. That was why he went to the protests,” Lin said.

Area residents later renamed the Kanna Road Market the Wai Yan Tun Market in his honour, but the military authorities have never acknowledged the change.

More than three weeks later, in the scorching heat of Mandalay’s dry season, thousands of protesters gathered on a road in Maha Aungmyay’s Sein Pan ward in a “Sitting Strike,” chanting in unison for the fall of the coup regime.

The action was held in commemoration of the 33rd anniversary of the death of Phone Maw, the first student killed by the military during an earlier wave of pro-democracy protests in 1988.

Again, junta troops used lethal force in an attempt to break up the demonstration, blocking the streets leading into and out of the ward. They began shooting into the crowd, as well as storming homes, arresting and assaulting civilians.

A Mandalay-based journalist who was present at the scene recalled the horrifying events that followed.

“I was trapped along with the protest mob. There was no place to run when they started shooting,” she said. “We had to run towards someone in a small wooden house who was calling out to us, yelling ‘Kids! Kids! Come in here!’”

An elderly woman hid her, along with 10 fleeing protesters.

“I will never forget what happened that day. I was inches away from death. We were staring into each other’s eyes in a narrow attic and we could hear each other breathing,” she remembered. “There were more than 30 gunshots fired outside. We could hear people wailing until they choked and their voices cracked, and the soldiers were yelling at people to put their hands behind their heads and beating them.”

“It was enough to drive a person insane,” she added.

While she and the protesters in the house were able to escape before the junta troops searched the property, they saw that those seeking refuge in the residence across the street were apprehended. An eyewitness to the crackdown described how the home’s owner, Daw Pyone, was reportedly shot and killed at point blank range.

“The old lady begged the troops for mercy when they told her to give the protesters up, and a soldier shot her in the head. The protesters came out of the house and surrendered out of guilt,” the individual said. “Only seven of them who were hiding under the bed managed to escape.”

As she ran, the local journalist recalled seeing “horribly disfigured bodies” in the street and people “crying and covered in blood,” as members of a local social welfare group tried to provide first aid.

She told Myanmar Now that after that incident she struggled with flashbacks, had difficulties eating, and was unable to write news, as her job required.

“I couldn’t do anything but put my head underwater and scream,” she said. “I felt like I saw hell in front of my eyes.”

The total number of people killed in the six-hour suppression of the demonstration in Maha Aungmyay remains unconfirmed, but thousands are believed to have taken part in the protest. Myanmar Now was able to verify five deaths; in these cases the bodies of the victims were returned to their families. More are believed to have died, their bodies seized by the military.

Around two weeks after the violence of March 13, anonymous resistance forces in Maha Aungmyay retaliated.

On April 1, unknown perpetrators set fire to the junta’s administration office in Than Nauk ward, destroying the structure, a symbol of the military council’s claim to government legitimacy.

As efforts were made over the following months to rebuild the office, several anti-junta guerrilla forces that had formed in the aftermath of the coup orchestrated attacks at the construction site using improvised explosive devices.

“The entire population of the ward was against the rebuilding of the administration office. They kept rebuilding it anyway and the explosions kept happening as well,” a Than Nauk resident said.

Myanmar Now confirmed that there had been at least eight blasts at the administration office since the coup.

During the same period, guerrilla forces also assassinated several junta personnel in Maha Aungmyay. Among them were the administrators of Ayadaw and Hayma Marlar wards and several alleged junta informants.

The military council awarded more than 400 administrators nationwide “medals of bravery” in January for assisting in the operation of their government mechanism—six were from the Mandalay township.

Amid the ongoing struggle, anti-coup actions have continued to take unexpected forms, including from vendors who once sold jewels in Maha Aungmyay’s gemstone centre in eastern Daywun ward.

To avoid paying a required tax to the military regime, many gems dealers refused to work at the site, which has been bombed multiple times by urban guerrilla groups who aim to cut off the junta’s sources of revenue.

The vendors instead moved their businesses from the official marketplace—once home to 1,000 shops—to a nearby area along the Thingazar Stream.

“The primary driving factor for us is that we don’t want to pay taxes to the military but we still have to work in order to make ends meet,” Thet, a gems dealer, said.

“That’s why we started trading along the shores of the stream, but the military came there frequently, shooting at and arresting us. Those that were captured were forced to conduct business back in the centre.”

Several dealers continue to do business elsewhere and have refused to return to the designated market.

In opposition to the military council’s repression in and hold on Maha Aungmyay, would-be Buddhist monks have also opted not to join several well-known monasteries in the township, including Hpayar Gyi, Ma Soe Yein and Mya Taung. The three sites once hosted nearly 5,000 novices but as of last August, just over 1,000 men were studying there, according to local abbots.

Guerrilla presence in the township has also increased, with several junta troops injured in explosive attacks on army vehicles and offices in recent months.

Generation Z Power is among the armed resistance forces that have claimed responsibility for assaults on military personnel, positions and movements in Maha Aungmyay. Its members assassinated an off-duty officer, Lance Corporal Tin Myo Htwe, from Infantry Battalion 322 based in northern Shan State’s Laukkai while he was visiting his mother in the township in June.

“Our township is never going to back down,” another resident of Maha Aungmyay said. “We will revolt in any way we can.”