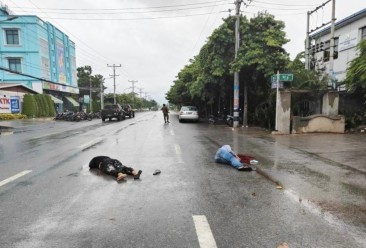 The bodies of Sithu Ko Ko, 42, and his wife Hnin Wai Wai Hlaing, 38, lie in the road after they were shot dead by armed assailants on August 23 (Supplied)

A married couple and two others were killed in Mandalay over the past two days, in what appeared to be a series of targeted attacks by anti-regime guerrilla groups.

The couple, 42-year-old Sithu Ko Ko and his wife Hnin Wai Wai Hlaing, 38, were shot to death on Tuesday morning at the intersection of 30th and 57th streets in the city’s Chanayethazan Township, according to witnesses.

They were on their motorcycle when a group of gunmen approached them and opened fire, shooting them at least four times, said a woman who heard the gunshots.

“When I looked over, the man was on the ground, all curled up. But I couldn’t see the wife from where I was,” she said, adding that both were killed instantly.

It was later learned that the couple were on their way home after dropping their eight-year-old daughter off at school.

On Wednesday, a group called Tiger Force Mandalay claimed responsibility for the shooting and apologised for the mistake.

“It was the unintentional mistake of Tiger Force Mandalay’s scout team and we apologise deeply to the victims’ families. This has nothing to do with any other revolutionary group and we vow to take full accountability for the incident at a future time,” the group said in a statement.

The group also confirmed that the intended target was Soe Ko Ko, a police major in the Criminal Investigation Department, as several sources had claimed.

“When I heard that it was a case of mistaken identity, it just tore me apart. They were on their way back home from sending their kid off to school. When I thought about the daughter, I started crying. Poor little girl!” said the woman who witnessed the shootings.

The attack came a day after a series of other incidents in and around Mandalay that left two people dead and two others injured.

The first occurred in Pyigyidagun Township, about 10km south of Chanayethazan, where a man in his 50s was shot dead on Monday morning.

The victim was identified as Soe Hnin, who some local sources said was a regime informant. Myanmar Now was unable to confirm this information.

Later in the day, at around 1pm, several blasts were reported at a distribution centre operated by Myanmar Beer, a military-owned brewery, in Chanmyathazi Township.

Two young men, aged 18 and 19, suffered leg injuries in the attack, according to residents of the area, which is located between Pyigyidagun and Chanayethazan townships.

It was the second time since last year that the distribution centre has been hit by explosives, residents said.

A third incident occurred about two hours later, when another man was shot dead in a village in Patheingyi Township, which lies just east of Mandalay’s urban area.

According to a Patheingyi local, the victim, a municipal worker  in the village of Letkaung named Aung Kyaw San, died instantly after he was shot in the chest.

No group has claimed responsibility for any of the attacks on Monday.

The continuing attacks in Mandalay come despite tightened security in the city and the arrest of at least 40 guerrilla fighters since July.