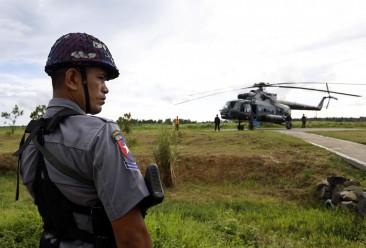 A military helicopter is seen in Maungdaw in September 2017 (EPA)

Multiple military aircraft were seen arriving in Rakhine State’s northern Maungdaw Township on Tuesday as battles between the junta’s forces and those of the Arakan Army (AA) intensified nearby, locals said.

The fighting began at 9am between the villages of Mee Taik and Nga Yant Chaung.

“The battle started this morning and we have been hearing loud bangs from heavy weapons ever since,” a Maungdaw local told Myanmar Now that afternoon.

A resident of Mee Taik confirmed that the fighting took place around one mile north of the village.

“Junta aircraft came too. They landed in Taung Pyo Let Wea,” he said, referring to a town two miles from the area where the clash took place, and where a Myanmar army tactical base is located.

Eyewitnesses in the town said that helicopters landed at the base around three times that afternoon, but were unable to confirm whether they had airlifted troops to the location, a practice which has increasingly been seen in offensives in resistance strongholds such as Sagaing Region.

“We can’t even go out of our houses right now,” one of the Taung Pyo Let Wea residents explained, referring to the ongoing fighting surrounding the town.

Helicopters were also reportedly seen delivering soldiers to a military base in Maungdaw town, around 40 miles south of the clash site.

An earlier clash between the AA and the junta’s forces took place near mile marker 41 on Maungdaw’s border with Bangladesh on August 13, with a major from the military’s Infantry Battalion 20 under the Sittwe Regional Operations Command allegedly killed, according to an AA statement and regional media outlets.

That day, battles also broke out elsewhere in Maungdaw, as well as in neighbouring Rathedaung Township and in Paletwa, southern Chin State. In Rathedaung alone, some 700 people from at least two villages were displaced, according to local news reports.

Citing AA sources, Rakhine State-based media said that more than 30 junta personnel were killed in the episodes of fighting. The AA released its own statement on Monday claiming to have confiscated military drones, explosives, guns, and food supplies from the junta following the clashes.

There were also an unconfirmed number of AA casualties, according to local reports.

The military council has not released any information concerning the recent battles.

At a press conference on August 11, AA spokesperson Khaing Thukha said that the Myanmar army had withdrawn from several bases in Maungdaw amid growing tension in the region following the AA capture of 14 junta personnel in mid-July.

Several AA negotiation officers were previously arrested by the military council in May.

The AA and the military entered into an informal ceasefire agreement in late 2020 after two years of fighting, with clashes resuming in late 2021.