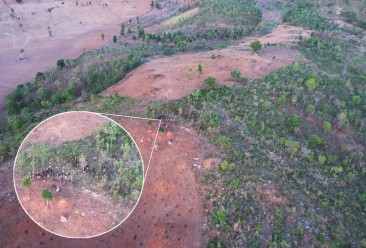 A massive offensive launched by Myanmar’s military in southern Shan State nearly two weeks ago has begun to wear down anti-regime groups in the area, according to resistance sources.

The area east of Pekhon Lake has come under sustained artillery fire since local defence forces overran a military outpost in Nyaungshwe Township on May 12. The outpost was located near the border with Pekhon Township.

“We are facing more casualties as our soldiers are getting exhausted and are running out of weapons,” said an officer of the Pekhon People’s Defence Force (PDF).

According to multiple sources, the alliance of anti-regime groups fighting in the hills east of Pekhon Lake have lost a total of six members since the offensive began.

The most recent confirmed casualties were two Pekhon PDF members killed on Monday near the village of Ma Hkay Hkam, in the Loi Paw village tract.

The group also lost a member last Friday, while clashes on Wednesday near the Moebye dam claimed the lives of two resistance fighters—one from the Pekhon PDF and another from the Karenni Nationalities Defence Force’s (KNDF).

Three days earlier, on May 15, a member of another allied group, Shan Hills Battalion 1008, became the first casualty of the offensive when he was killed in the village of Saung Nang Khae.

Most of the resistance groups involved in the fighting, apart from the KNDF, are PDFs under the direct control of the shadow National Unity Government (NUG).

While the resistance groups have a certain number of assault rifles and M79 grenade launchers at their disposal, these have been no match for the 105mm and 120mm artillery shells that the military has been using to bombard their positions.

Anti-regime groups that have not withdrawn from the area say they have been mostly reduced to taking up a defensive posture.

“All we can do is dig trenches and try to withstand the artillery fire. But that hasn’t been very effective against such a heavy onslaught,” a spokesperson for the Pekhon PDF told Myanmar Now.

He added that drone cameras have captured junta troops looting shops in Loi Paw, one of the villages emptied by the fighting, while two other villages, Saung Nang Khae and Nang Paw Lon, have been subjected to repeated arson attacks.

Meanwhile, a KNDF member said that junta troops occupying the village of Tsi Mi Lawt, located opposite the town of Moebye, withdrew on Monday.

“They were stationed in the school and on the hill, but they left to go back to LIB 422 in Moebye last night. Things seem to be calm today,” he said.

Heavy shelling of the village did extensive damage, destroying houses and power lines, while two cows owned by local farmers were reportedly killed by landmines, he added.

It was exactly a year ago on Saturday that ethnic Karenni forces in Kayah (Karenni) State and parts of southern Shan State, including Pekhon Township, began their armed resistance to military rule.

According to a report released by the Karenni Civil Social Network earlier this month, nearly 200,000 Karenni civilians—or roughly two-thirds of the Karenni State population—have been displaced by the conflict.