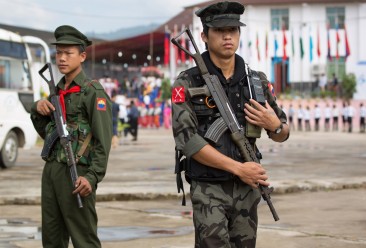 KIA soldiers in Mai Ja Yang, a town controlled by the group in northern Kachin State (STR/AFP via Getty Images)

The Kachin Independence Army (KIA) failed on Tuesday to capture a police station in Kachin State’s Hpakant Township, a day after overrunning a military outpost and a rival ethnic army’s checkpoint in the same area.

Residents of Sezin, a village located about 50km southwest of the town of Hpakant, said that the military carried out two airstrikes there on Tuesday afternoon to repel the KIA attack.

The KIA troops began their assault at around 1pm, and a military helicopter and a fighter jet arrived about 30 minutes later, a local man told Myanmar Now.

Earlier, he said, several shots were fired from a helicopter at places around the village where KIA troops were believed to be located.

“They fired randomly around the village at around noon, before the clash started, and then resumed after the KIA began their attack on the police station,” he said.

Residents of the area fled after the clash broke out, and are still sheltering at a nearby monastery, according to a woman who lives in the village.

Fighting continued until around 3pm, she said, adding that the KIA forces retreated after coming under aerial assault.

“The police station is not that big, but the KIA couldn’t attack it properly because of the airstrikes,” the woman said.

Myanmar Now attempted to contact KIA information officer Col Naw Bu for further details on the incident, but he was unavailable for comment.

A day earlier, KIA forces captured a nearby junta outpost and a checkpoint manned by members of the Shanni Nationalities Army (SNA), an ethnic armed group accused of collaborating with regime forces.

Five junta soldiers stationed at the outpost were reportedly taken prisoner, and several bodies were seen near the SNA checkpoint after it came under attack.

It was unclear how many casualties there were from the two days of fighting, but at least one 40-year-old man was reported dead after an army artillery shell landed near the police station in Sezin on Monday.

Citing local sources, SNA spokesperson Col Sai Phone Han confirmed that several members of the group had been killed, but said that the exact number was still unknown.

“We are still monitoring the situation,” he said, adding that the SNA troops retreated because they were outnumbered.

The KIA also clashed with regime troops near Sezin in July, pinning down an army column for three days, until the military launched a series of airstrikes.

Since then, the junta forces have remained mainly on a hill east of Sezin, with reinforcements coming in by helicopter, according to sources.

The KIA has had a number of serious battles with regime forces and their allies over the past month, not only in Hpakant, but also in Tanai and Waingmaw townships in Kachin State and Kutkai Township in Shan State.

The group has spoken out against last year’s coup, and the chair of its political wing, Gen N’Ban La, has vowed to collaborate with the country’s people and other organisations to “eliminate the dictatorship.”

The SNA has denied siding with the regime, but said that it had joined forces with junta troops in some cases to fight back against incursions by other groups on its territory.