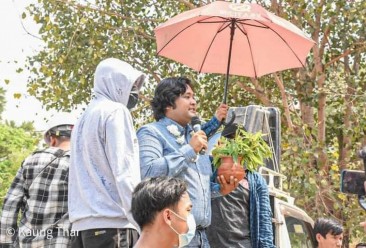 Monywa-based protest leader Wai Moe Naing, detained since last year after being hit by a vehicle driven by junta forces, was given a rare chance to speak to his mother on Wednesday.

According to his mother, Moe Sandar Kyu, the brief encounter took place during a court hearing inside Monywa Prison, where he is facing multiple charges related to his anti-regime activities.

“I was allowed to speak with him. There were guards nearby, but they didn’t interfere with us,” she said, adding that her son appeared to be in good health but “looked like a prisoner” after more than a year in captivity.

“It made me both happy and sad at the same time to see him. He told me about the things he has seen since he was taken from us,” she said, without elaborating.

Like other political prisoners, Wai Moe Naing has been denied prison visits under the pretext of Covid-19 restrictions. However, he has been permitted to receive care packages from his family.

He was arrested in April of last year after being rammed into by a junta vehicle while taking part in an anti-coup motorcycle rally.

Soon after his capture, he was hit with a long list of charges, including incitement, murder, wrongful confinement, armed robbery, unlawful assembly, and violating Covid-19 rules.

Six charges, for incitement under Section 505a of the Penal Code, are related to his role in leading protests, as well as his formation of a township administration team and his calls to public employees to join the Civil Disobedience Movement.

While the charge is a common one laid against regime opponents, few have been accused of so many instances of it.

According to his mother, however, the greater concern is that he is also facing more serious charges that could carry much stiffer penalties.

“He is actually responsible for the six Section 505 offenses, as everyone knows, so that’s not really a problem. But I am very worried about him being handed major sentences for the other crimes, which he didn’t in fact commit,” said Moe Sandar Kyu.

It was still unclear if the defendant’s mother would be allowed to testify on behalf of her son, who has been accused of involvement in the killings of two police officers in Monywa in March of last year.

“I want to explain at the court that he didn’t commit any murder. I want this chance as soon as possible,” she said more than a year ago, when the murder charges against Wai Moe Naing were first laid.

She said a final judgment was expected next month on at least one of the charges against him, although she was sure which one.