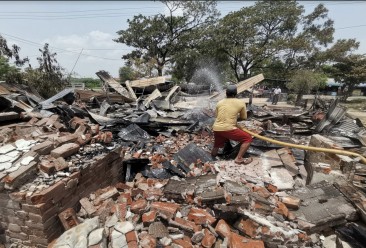 The Myanmar military has continued its rampage across much of southern Sagaing Region in recent days, killing civilians and torching homes in Yinmabin and Khin-U townships.

On Monday, the bodies of four villagers were discovered in Lel Ngauk, a village about 5km south of the town of Yinmabin, after troops stationed there for the previous three days left the area.

Three of the victims, including one woman, appeared to have been burned alive with their hands tied behind their backs, while the fourth was shot in the head while attempting to escape, according to two village residents who spoke to Myanmar Now on condition of anonymity.

The junta troops initially attacked the village last Friday, forcing most of its inhabitants to flee, the two locals said.

A column of around 50 soldiers then took control of the village, burning down at least 50 houses during clashes with a local defence force, they added.

Htet Kaung, the defence force leader, said that most of the destruction was concentrated in the part of the village near the Pale-Yinmabin road.

He added that three vehicles belonging to the Shwe Zayti monastery, where the soldiers were stationed while in the village, were also torched and destroyed.

“They pushed the cars from the monastery out of the compound and torched them on the road. The houses on the side of the road were also destroyed. Only the house with a communication tower in front of it was spared,” he said.

Many homes were also looted during the three-day occupation, he added. And according to a statement released by the anti-regime Yinmabin Information Team, two women were injured and a cow was killed when the soldiers fired indiscriminately into the surrounding area while in the village.

Some villagers returned after the regime forces left on Monday afternoon, but most remain in hiding, fearing their return, said Htet Kaung.

Meanwhile, a village in Khin-U Township, some 150km northeast of Yinmabin, faced a similar attack over the weekend.

Residents of Thayet Kone, a village of roughly 1,000 inhabitants located in the northern part of the township, said that more than 70 homes were destroyed by fire during a raid by around 100 regime soldiers on Sunday.

“They entered the village from the west, firing heavy artillery. Two shells fell inside the village, but we had all fled by that time, because we heard they were coming,” one resident told Myanmar Now on Monday.

Although the military has been targeting villages throughout the region for months, this was the first time that Thayet Kone had faced such an attack, the resident said.

Most of the destruction was reportedly in the eastern part of the village, which has a predominantly Muslim population. A mosque was among the buildings that were destroyed, local sources said.

Several people sheltering at the local school were arrested during the raid, according to sources.

Residents said they believed that Thayet Kone was targeted because of a social media post claiming that resistance forces active in the area were hiding at the school.

However, residents said that the people staying at the school were displace civilians from the nearby village of Kin Myit.

A spokesperson for the Khin-U People’s Defence Force (PDF) said that the troops who attacked the village were stationed in Pyin Htaung, a village located right next to Thayet Kone.

They had been based in Pyin Htaung for the past year, and had recently received reinforcements, he added.

“They captured the people staying inside the school and used their phones to call the numbers of the ones that fled. They also sent camera drones to track down the people who got away,” the PDF spokesperson said.

A member of another local defence force said that many of the arson attacks targeted the homes of resistance fighters.

“They focused on the houses of defence force members. My house was one of them. It’s a two-storey building and everything inside was reduced to ashes. All we have left is the clothes on our backs. I alone lost 40m kyat [$22,000],” he said.

According to a statement released by the Khin-U PDF on Sunday, three junta soldiers were killed by explosives planted near the village of Aungtha in Kanbalu Township earlier in the day.

Several others were also injured in the attack, which was carried out near the Kar Boe dam, but the total number of regime casualties could not be confirmed, the group said.